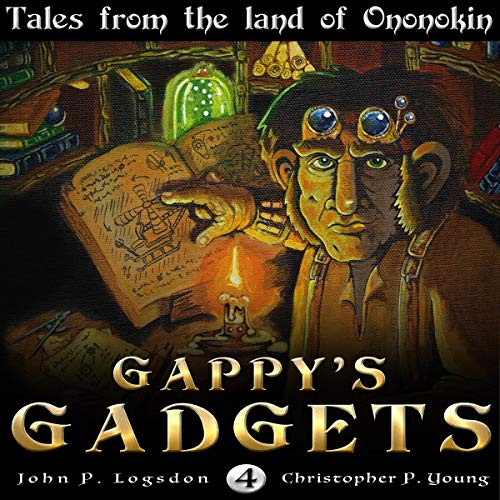 The endearingly hilarious tale about a young Gnome who strikes out on his own!

Gappy Whirligig is an industrious Gnome who has yet to reach the Age of Tinkering.

But, as anyone who lives in the Gnome town of Hubintegler can tell you, things have a way of exploding when least expected. In a flash, Gappy's life flips upside down, leaving him to make the decision to either strike out on his own or become a 42-year-old foster child. Gappy demonstrates his industrious spirit as he leaves Hubintegler's rules and regulations behind and instead seeks to make his mark in the seedy town of Planoontik.

Along with his Orc assistant, Shrit, Gappy fights through the red tape of starting a business, running a business, dealing with the local Halfia (the Halfling Mafia), and battling the competition.

What listeners say about Gappy's Gadgets

I felt this was a good addition to the Ononokin universe. It was cute, lighthearted, and moved along quickly, while sticking to the major themes of the world. The plot was predictable, but still fun to listen to. The narrator did a good job with all the different voices, and it was easy to identify which character was speaking. I can’t say it was absorbing, but if you’re looking for something fluffy to play while you’re cooking or driving, it’s worth a listen.

when I can get my fix of Vamps , wizards, and other assorted creatures. It is a good day
And if I can get a laugh at the same time.... DAMN !

I have greatly enjoyed the Ononokin series!! The stories and interesting, humorous, and....just so entertaining! Jus Sargeant is the perfect narrator, wonderfully giving voice to each character!

I've listened on Audible to all the other Ononokin titles and this is simply one of the best.
The story Is extremely funny, the characters have a fountain humorous one liners that I shall be quoting for quite a while, especially mumble mumble ladder. ha ha ha
Beautiful performance by Jus Sargeant as usual.
loved it. ☆☆▪AAA ☆☆☆

Can't wait for the next

Would you listen to Gappy's Gadgets again? Why?

If I needed to recap for the next in series I would.

What other book might you compare Gappy's Gadgets to, and why?

Have you listened to any of Jus Sargeant’s other performances? How does this one compare?

Others in series, just as good

very enjoyable.good light hearted listening. can recommend the series. A pratchettesc fantasy world which encourages a rethink of how and why things are whilst raising a smile.