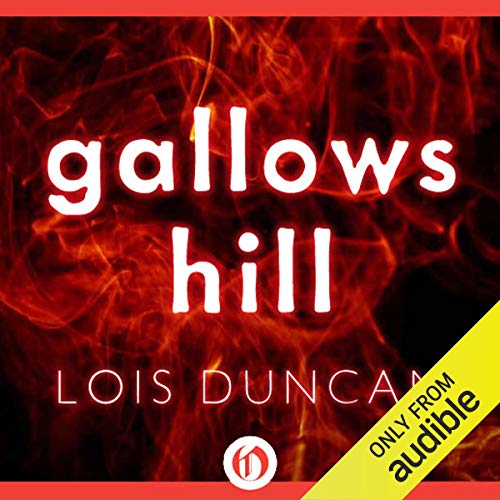 17-year-old Sarah doesn’t believe in magic, but she thinks it’s fun to pretend to be a psychic - until her startling visions of the future turn deadly.

When Sarah Zoltanne moves from sunny California to a small town in Missouri, she feels like she'll never fit in. Her mother is dating a jerk, the kids at her school despise her, and she misses her old home. So when a popular boy asks her to tell fortunes at a school fair, she jumps at the chance. But soon her crystal ball begins to swirl with strange visions and her outlandish predictions start to come true with startling accuracy. Now Sarah must confront a community that not only mistrusts her, but also fears her strange powers.

Gallows Hill is a spine-chilling thriller based on the story of the Salem witch trials.

What listeners say about Gallows Hill

This is one of the few books that I read as a child and I still return to reread it. I love how Lois Duncan is able to craft a world of paranormal in such realistic settings.

"Gallows Hill" is a very well crafted suspense/supernatural thriller. Although I don't usually go for the paranormal books, this one was presented in a way that was, for the most part, believable. It is also supposed to be a young adult book, but I found it entertaining for the not-so-young adults as well.

The book starts with Sarah Zoltanne being forced to relocate from Ventura, California, to tiny Pine Crest, Missouri, for her final year of high school. She was forced to follow when her mother Rosemary, widowed for several years, met Ted Thompson at a teacher conference and fell irresistibly in love. Ted was still married, although separated, and had a teenage daughter, Kyra, who was only one year younger than Sarah. The move was particularly rough for Sarah as no child wants to move away from their friends for their last year of high school. Add to that the fact that Pine Crest was a small community where the children had known each other almost from birth, and Sarah and Kyra couldn't stand each other, and you get what was the makings of a pretty miserable senior year for Sarah.

The class president, and anointed golden boy of Pine Crest, Eric Garrett, asks Sarah to help with the senior class fundraiser. They were holding a carnival in the gymnasium and Eric wanted her to be 'Madame Zoltanne,' fortune teller extraordinaire. Sarah tried every excuse she could think of to get out of it especially the fact that she didn't know the first thing about telling fortunes. Eric had a plan though. Kyra had a wireless radio and would feed info on all the people walking in Sarah's tent. Sarah would then put everything together and come up with a fortune. Her mother even had a crystal paperweight (which had a life of its own) that Sarah could use as a crystal ball.

Pressured to try and 'fit in' by Ted and Rosemary, Sarah agrees. The night turned out to be a major success. People were astonished that a stranger knew so many details about them, many she had never even spoken with before. All was going very well until Charlie Gorman walked in. Overweight and uncoordinated, Charlie was the class whipping board and was constantly being teased. When Sarah looked in the crystal ball for Charlie, she saw him being pushed down a flight of stairs. She was so taken aback by this that she feigned a headache and, since the carnival was almost over, decided to call it a night. When Charlie showed up at school the next day with a cast on his arm, things started getting sticky for Sarah.

Eric, having a hidden agenda of his own, pressures Sarah into holding private readings for cash. Kyra has a major crush on Eric and agrees to help. As she holds more fortune readings, Sarah sees things in the crystal ball which ultimately come to fruition. Add to this her nightmares about the Salem Witch trials and her growing friendship with Charlie, who is a proponent of reincarnation, and things start to spiral out of control for Sarah.

I very much enjoyed reading this book and while the plot was not really surprising, it kept the pages turning. None of us know what's on the other side of the grave, so who can say what happens.

I enjoyed this book, I don't adhere to new age beliefs, but all in all good storyline. I always liked Lois Duncan's books.

The general story line of the book had potential but got slightly campy with the “twist”. The movie based on it (I’ve Been Waiting For You) is actually surprisingly better, and I don’t say that much. The narrator was the worst part. More emotion was needed and better pronunciation and less mistakes would’ve helped.

I first came upon this book in the school library in about fourth grade, give or take a year. Raised by a Christian family with plenty of personal demons to hide, stuck in a tiny rural town much like the one described in this story. Like Sarah, however, from childhood I was fascinated by new age ideas, reincarnation, mythology, the occult, etc. I saw The Crucible and immediately read up on the witch trials for fun, and guess what? I grew up to become a Wiccan witch!

Now, before you go blaming this book for the conversion, don't even think about it. This book did not draw me to witchcraft. This book provided comfort when I recognized even as a child that I was not like the other people around me. Back when I felt I was simply a freak, this book told me there were other ways of thinking, and other ways to live, and that there's no shame in being the odd duck; you just have to be patient and strong until you find your real flock. This book reminds the reader to keep an open mind, to question everything, and that no good ever comes from caging and denying your true self. I highly recommend it to readers and listeners of all ages.

Good little story! I thoroughly enjoyed the plot, and listened to it all within 1 day. Truly engaging.

I remembered this as being one of my favourites of Lois Duncan's books when I read a clutch of them years ago. I didn't like it as much this time around. I still liked Charlie very much, and the plot is good, but I'd forgotten how annoying Sarah herself is. Or maybe that's just me. She has plenty to bear, but she doesn't do herself any favours by being constantly prickly and confrontational.