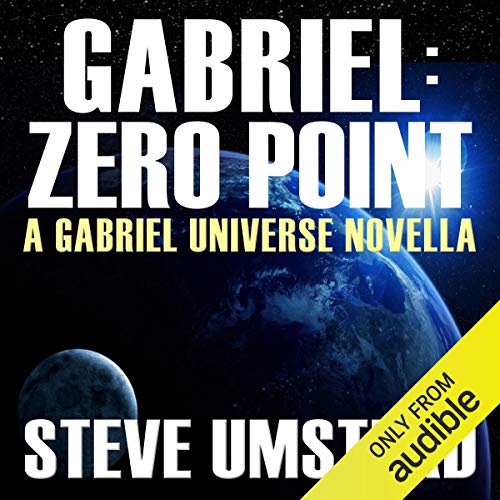 By: Steve Umstead
Narrated by: Ray Chase
Try for $0.00

Evan Gabriel wasn't always a feared and respected North American Federation Navy Commander. Before dangerous missions to the ice-bound planet of Poliahu, the deadly jungle world of Eden, and politically corrupt Mars, he was a simple recruit, fighting to make his mark in the elite Naval Special Forces…and was part of a top-secret military experiment that would change his life forever.

Zero Point tells the tale of a young man faced with difficult choices and dangerous trials. Fans of the series will see part of the mysterious past Evan Gabriel carries with him, while listeners new to the series get a preview of what is to come in a military man's haunted life. Zero Point is the true beginning of Evan Gabriel, and his story is just getting started.

"Umstead can write an action-packed adventure story better than most. He is an artist in designing a high-tech battlefield and weaving in the human element with his character's depth and color. If you like action in a science fiction setting then you really need to listen to this audiobook and give it a shot." (Tom Clementson, The Kindle Book Review)
"This series brings me back to the old days when sci-fi was about ass kicking, great friends, loyalty and action." (Amazon Reviewer)

Take care here readers, there might be a story in here, but you will not be able to enjoy it with the incredibly bad narration. I deeply regret my failed attempt to make it through this short introduction to the series.

Ray: I know you don't speak anything like this in your life. And you have never heard anyone speak like this. How did this book make it out into the world without anyone mentioning that your use of falling intonation renders the book into an unbearable experience?

Steve: Get this redone. Please. I want to experience the series, but as it stands, that is not possible.

Just not my type of literature. Could not hold my interest. I did not finish.

THE FLICKER OF THAT MEMORY

FLICKERED
You can't get too upset when something is free, it just cost your time. It was a good way for me to find out I don't want to continue the series. The writing is a little stilted. The characters are card board cut outs. The story is old hat. If you like Gordon Dickson, you will love this.

I hope the whole series is not read by this narrator. He reads in a very sing song way, which I found distracting.

Average story but what's up with wistful narration

Sure, it was short and it let me know a little bit about the series.

Would you be willing to try another book from Steve Umstead? Why or why not?

Since the first book in the series after this is on sale, maybe.

Who would you have cast as narrator instead of Ray Chase?

Was Gabriel: Zero Point: The FREE Prequel Novella worth the listening time?

I want a good SciFi series to complement the Fantasy series and non fiction I am listening to but even after this trial I am not sure if this is the series I should go with. The narrator spoke clearly and could have been good if he didn't make every sentence seem like wistful reminiscing. There is nothing in the book that called for that tone. It is a military book and I think a reader that could be more.....commanding(?) would have served better. I am not sure about the main character either as he did not figure out the obvious until it was explained to him. I mean I knew what was obvious from the moment it started and I don't think they gave the reader any knowledge the character didn't have other than we have consumed fiction before (of course the character does know more about the ethics and technology of the world he is in) but dam that was really REALLY obvious.So bad narration and stupid main character, but I do like the 'Universal Soldier in Space' concept and the first book in the series is really cheap at the moment. I have to check the narrator, maybe he was just like that because it was a prequel..or maybe I should look for another series.

why does be talk like hes reading a love letter?

Found the voice of the narrator strangely mismatched with what he was reading. otherwise a quite enjoyable book

A Military Science Fiction - not for me.

I listened to about 1 and a half hours of it and finally gave up on it.

I was also annoyed by the narrator, Ray Chase. I just did not enjoy his narrative style.

I will not be reading the sequels.

*Please note that I haven’t read the rest of this trilogy, so I went into this novella with a blank slate. The description mentions this could be read before or after reading the other. I’m sure my reaction would be a little different had I read it after the other books.*

Gabriel: Zero Point was a pretty good novella. There isn’t that much to it in terms of building the futuristic world that it’s set in, but it does a great job of setting up Gabriel, the main character. Being that he is the main character of the trilogy that follows this novella, I think getting the story of where he started is probably better than getting the grander world view. The novels have more room for that. Still, this is only, for the most part, a small glimpse into what is to come and I felt like maybe just a little more info would have made it that much more enjoyable for me.

Overall, it’s filled with action, there aren’t any lulls to the story, and it’s gotten me interested in the other books. I think Umstead has much in store for me, once I start the trilogy. I’m looking forward to it.

I love a free beginning

Gabriel:Zero Point is a prequel novella to the Evan Gabriel Triology which can be listened to before or after the other three titles. A recruit in the elite Naval Special Forces, Evan Gabriel strives to be the head of his class and is soon chosen for a top-secret military experiment that will force him to make critical choices and a dangerous situation while coming to grips with who or what he has become.

As I have mentioned before,I'm never been a huge fan of Science Fiction and military type stories but Steve Umstead and Michael K. Rose in particular are changing my views. I hate to compare this to movies but "Zero Point" is a mixture of "Universal Solider" and "The Bourne Identity".

Umstead's writing is clear,engaging and the characters are well defined. Action within the novella is handled and described well finding a perfect balance. As with Rose's "Sullivan's War" series the technology used in "Zero Point" is realistic and described well enough that there is no doubt how they operate. Overall "Gabriel: Zero Point" was a great read that has peaked my interest in the "Evan Gabriel Trilogy".

A big Thanks for this intriguing freebee

Wow, i wasn't sure what to expect really but i was very pleasantly surprised with this capturing short story. Most grateful for this free and exciting introduction to this new series. Narration was fabulous by Ray Chase :))

First the super hero who could do anything never interested me. Then we have a hero solider that has killed but when he has to take the life of some mass murders he breaks apart. The narrator also kept taking me out of the story by the tone and inflection.

Where does Gabriel: Zero Point: The FREE Prequel Novella rank among all the audiobooks you’ve listened to so far?

For a short story, it is well worth a listen. Will certainly listen to others in the series

This was quite meh. The plot was okay, nothing brilliant but not bad. There wasn’t much world building and there isn’t much description in the scenes. It doesn’t really make me want to listen to the subsequent trilogy.

Entertaining if a little predictable

I enjoyed this - a bonus that it was free but I thought the performance was good and the story entertained me , even if it was pretty obvious what was going to happen.
I'll consider carrying on with the series.

Well read, a gripping story. Recommended read. A good basis for the series. Looking forward to the rest of them.

Can't listen to it!

The voice actor has a great voice, dont get me wrong. But he is trying to be a bit flighty with his voice. I can't really explain it but I just found it irritating. It is like he is trying to do an impression of Morgan Freeman, but not very well. The cadence is just all wrong. When he voices the characters he is very good but I just can't get past the rest.

I think that the story has a lot going for it and if i could just get past my irritation of the narator i might enjoy it.

Maybe if he didn't sound so bored/breathy? It feels that this is more of a performance than a book reading.

Nice book that reminded me of many action movies that I have seen. Good narration

This audiobook is an interesting origin story. Did it make me want to run out and buy the trilogy? No. I didn’t connect/identify with the main character, or feel any tension etc. The narration is good, but the story wasn’t for me.

Terrible narrator couldn't. Listen to it. I think they picked this guy from bargain basement librevox. Like a bad amateur theatre actor, over the top with weird intonation.

Really disliked this narrator. He uses the same crescendo for every sentence, even banal sentences sound ridiculously tense.

If I was reading it, it would have been a page turner! :)

Not usually accustomed to listening to military intelligence style, action packed Sci - Fi but definitely worth a listen! It's free so why not?!

I knew the lingo pretty well due to a military upbringing. Therefore, I found I could follow the story & plot well & also appreciate the authors research (and/or his background?), into military language, tactics and so on. This gave the it a convincing & genuine feel even though it was set in far into the future. However, watching a hell of a lot of this genre helped too! :)

Nevertheless, even if you're not used to this genre, the narrator Ray Chase, read extremely fluidly, with excellent articulation & rhythm at the right moments!

Am thinking now to read the whole series so nice work! You've succeeded to suck me in. Hehe. :p

A nice meaty short - now I want to read the series

Solid plot, good performance, enough to work alone but hooks you for the series. Exactly what you look for in a free short story.