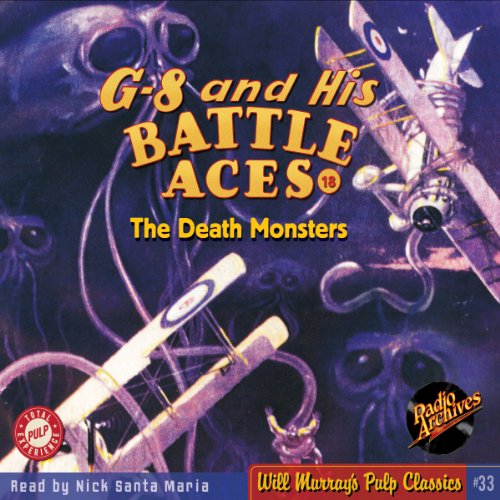 Total Pulp Experience. These exciting pulp adventures have been beautifully narrated for easy listening as an audiobook and features every story, every editorial, and every column of the original pulp magazine. As a special bonus, Will Murray has written an introduction especially for this series of audiobooks.

G-8 and his Battle Aces rode the nostalgia boom ten years after World War I ended. These high-flying exploits were tall tales of a World War that might have been, featuring monster bats, German zombies, wolf-men, harpies, Martians, and even tentacled floating monsters. Most of these monstrosities were the work of Germany’s seemingly endless supply of mad scientists, chief of whom was G-8’s recurring Nemesis, Herr Doktor Krueger. G-8 battled Germany’s Halloween shock troops for over a decade, not ceasing until the magazine folded in the middle of World War II. G-8 and his Battle Aces return in vintage pulp tales, reissued for today’s readers in electronic format.