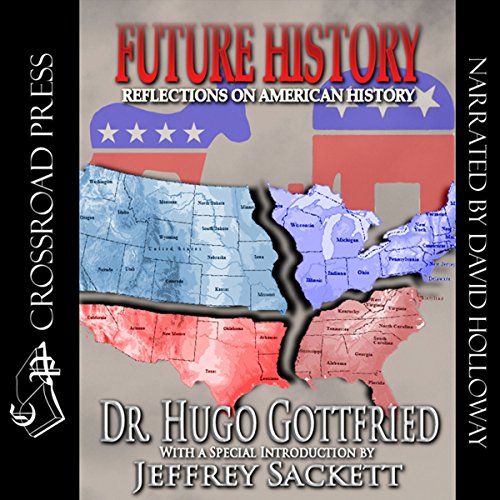 In 1776, the founders created the nation.

In 1789, the framers created the government.

In the 29th and 21st centuries, the American People destroyed their own freedom.

In the 22nd century, Hugo Gottfried discovered how and why it happened.

Read this book before it's too late.

By the wonder of reverse tachyon technology, we have been able to retrieve a series of essays on the History of the United States which was published (or will be published) in the year 2190 A.D. The author, Hugo Gottfried, was (will be) the custodian of the abandoned research library on Fifth Avenue in New York City. As he began in the middle of the 22nd century to read the old books down in the dark and dusty nether recesses of the crumbling old building, he slowly came to a startling realization: the economically impoverished, militarily impotent, morally bankrupt, totalitarian America of his era was not the great Republic envisioned by the Founders and created by the Framers.

We Americans of the early 21st century need to read Gottfried's reflections very, very, VERY carefully. He explains, from the standpoint of the future, what went wrong in America, when, why, and how. It is not too late the change the course of the river of History! He who has ears to hear, let him hear!

A note on the author: "Hugo Gottfried" is obviously a pseudonym. The author is a college teacher who holds the rank of associate professor. His field is History. He holds three master's degrees and a doctorate, and has been five times named a Fellow of the National Endowment for the Humanities.

A bit of a try hard book. Doesn't pull it off on the story side, it's academic approach is delusional, it's conspiracy theory is mildly interesting boarding on the absurd. Frankly it is pretty much painful. It should never have gotten past the editor without some serious developmental work.
My advice is to give this one a miss.