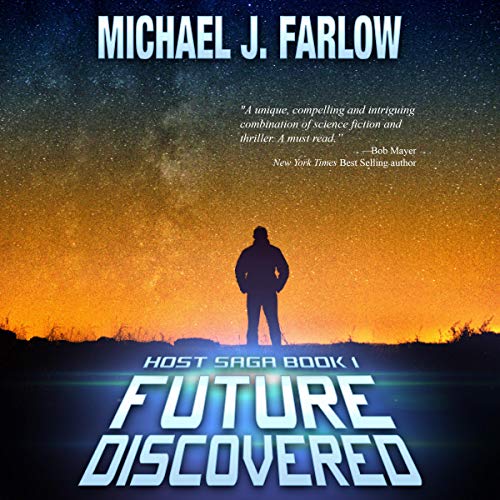 Van Childs’ accidental discovery of an alien cache of advanced technologies thrusts him into the role of reluctant hero. Learning of an extra-terrestrial race, the Host, who visited Earth some 200 years before, Van is forewarned of an impending invasion by the Arkon, an expansionist race. Van’s quest to prepare Earth meets with opposition by a powerful human adversary with conflicting goals. Who will win?

What listeners say about Future Discovered

Action packed, with lots of tech and AI!

*This book was given to me by the author at my request, and I provided this voluntary, unbiased review.*

I like the general premise of the story and how it started, the tech that is within, and also the pacing of the story. Things got a bit jump the shark-ish with what the MC was able to do, and I was also miffed about some of the plot devices used to fulfill a necessary action to move the story forward. I was especially miffed at the interactions of the MC and the antagonist. They walk a think line between of being Mary-Stu's, and I have no idea how any of the "stalemates" occur in the story. Like other reviews stated, this book comes awfully close to two different popular books in the genre; I partially agree, but I also believe the author steers it away by the end of the book. Also, having bigger heads/brains does not make you smarter. ;)

At the end of the day, this wasnt that bad of a read - give it chance; you may like it!

This was an interesting book to listen too. I enjoyed the storyline and the foresight of the Host. It'll be a journey to see how things turn out for everyone.

Perfect blend of SCI-Fi and Action/espionage.

Very interesting tale. A great combination of genres that peaks your interest and keeps the story flowing. Great characters and the tech is really cool.
Van stumbles onto some advance alien tech. He sets out on a philanthropic quest to save the world.
Some very surprising twists with plenty adventure and intrigue. Looking forward to the next book.

The narration was nicely done. Plenty of different voices with great emotional queues.

I requested a free review copy of this audiobook and I am leaving an honest and voluntary review.

I was waiting for some good old Earth vs Allies, but the story is mostly just the prerequisite with Earth bound cloak and dagger. Now that the stage is set, I want to hear the rest.

Cant wait for the next book

Had me gripped this one... im looking forward to the next instalment. Great story line.