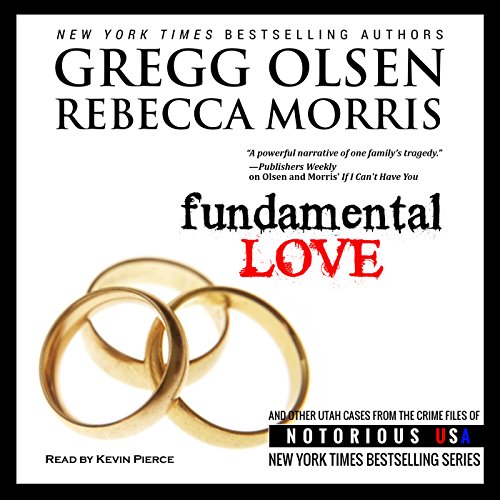 By: Gregg Olsen,Rebecca Morris
Narrated by: Kevin Pierce
Try for $0.00

New York Times best-selling authors Gregg Olsen and Rebecca Morris take a new look at Utah's most notorious crimes, including Megan Huntsman, the Utah mother who hid seven dead infants in a garage. A cold case that was finally solved by a child's Lego, the rogue Fundamentalist Mormon who thought it was his right to marry and rape young girls, the sad case of children dying in hot cars and the husband who ended years of lying with murder. There is also an update on the disappearance of Susan Cox Powell, the case Olsen and Morris write about in If I Can't Have You.

What listeners say about Fundamental Love


I found it disappointing, there was not meat on the story as I thought it would be. Sounded like it was a rehash of newspaper & TV stories

This is not a story per se…

I anticipated reading about the circumstances that led to the death of seven infants at the hands of their mother. However, this book is just a recitation of headlines from Utah's most notorious crimes. The publishers summary is quite misleading as there is no depth, discovery or storytelling involved. Very disappointing.

The narration by Kevin Pierce was professional and he did well given the material he had to work with.

Overall: very disappointing
performance: above average
story: does not apply

My take: while the description was intriguing, it was misleading. This type of book is not for me and I will avoid the others in this collection in the future.

I received a copy of this book in exchange for my review. If you found my review helpful, please select the appropriate choice below this box. Thank you.

the summary didnt give accurate description.

i thought this book would tell the story of the lady who gave birth and killed her children. Except all it did was guve updates of other books! boo hiss!

Good, better, best. As always, this took me to different place, and made me glad I had found another Olsen/Morris true life story.
Thank you Kevin Pierce for reading it so expertly.