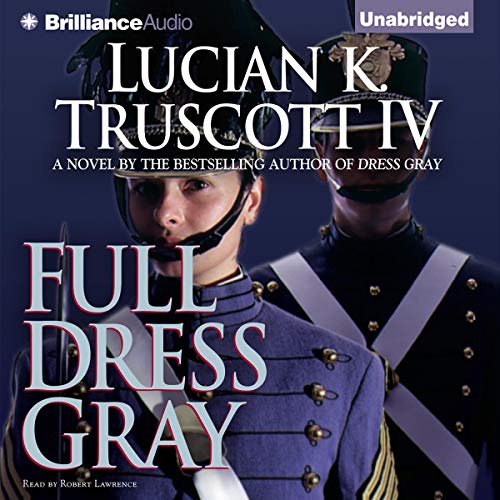 In the New York Times best seller Dress Gray, Ry Slaight was a rebellious cadet who almost destroyed West Point when he exposed and solved the murder of a gay cadet in 1969. Now, nearly three decades later, Slaight's been promoted to Lieutenant General and appointed Superintendent of the Military Academy.

And when the Commandant of Cadets aligns himself with a faction that believes the military academy should produce stone killers rather than an officer corps with a conscience, Slaight finds himself up against the same problems that bedeviled him as a cadet.

Now he's the only man who can put it back on its feet, as Full Dress Gray marches inexorably toward a climactic courtroom battle torn straight from today's headlines.

"This novel has it all - sex, politics, conspiracy. Truscott writes about military life with the authority of someone who has lived it." (Amazon.com review)
"[A] thoroughly satisfying mystery story with an uncommon setting. Cadets still live in a world of macho loyalties and politics, 'a kind of separate reality,' but justice does ultimately triumph within its halls. Strongly recommended." (Library Journal)

every time I listen to Full Dress Gray, I hear something someone new to root for.

A Worthy sequel to Dress Gray

Rysam Parker Slaight III is back at West Point. This time he is a three-star general and has just been appointed supervisor of the institution which has changed in many ways from his days as a cadet there, but is still in many ways just the same.

At the parade formation welcoming him to the institution, a female cadet drops dead on the field. The investigation into her cause of death ultimately implicates top cadets on the honor committee and the commandant of cadets and endangers Slaight's daughter J.C., herself a West Point cadet. It takes a team of military police, doctors, lawyers, and other cadets to untangle and solve the complicated case. A gripping listen.