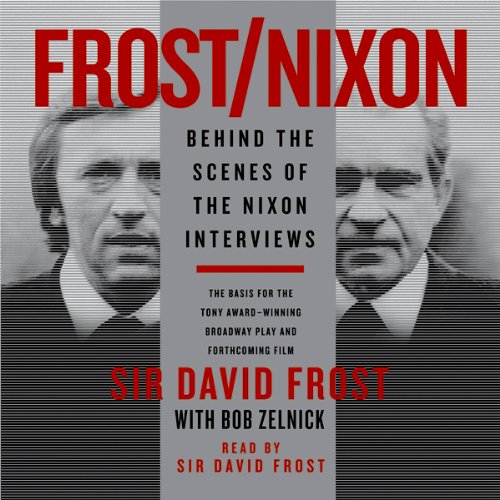 Following the resounding success of the eponymous West End and Broadway hit play, Frost/Nixon tells the extraordinary story of how Sir David Frost pursued and landed the biggest fish of his career - and how the series drew larger audiences than any news interview ever had in the United States, before being shown all over the world.

This is Frost's absorbing story of his pursuit of Richard Nixon, and is no less revealing of his own toughness and pertinacity than of the ex-President's elusiveness. Frost's encounters with such figures as Swifty Lazar, Ron Ziegler, potential sponsors, and Nixon as negotiator are nothing short of hilarious, and his insight into the taping of the programs themselves is fascinating.

Frost/Nixon provides the authoritative account of the only public trial that Nixon would ever have, and a revelation of the man's character as it appeared in the stress of 11 grueling sessions before the cameras. Including historical perspective and transcripts of the edited interviews, this is the story of Sir David Frost's quest to produce one of the most dramatic pieces of television ever broadcast, described by commentators at the time as "a catharsis" for the American people.

The actual excerpts from Nixon himself and the real interviews, make this listen excellent and completely worth it. Otherwise, the narrator’s voice is dull and very boring and thus, that makes this a very dry listen and a little hard to follow and get my undivided attention.