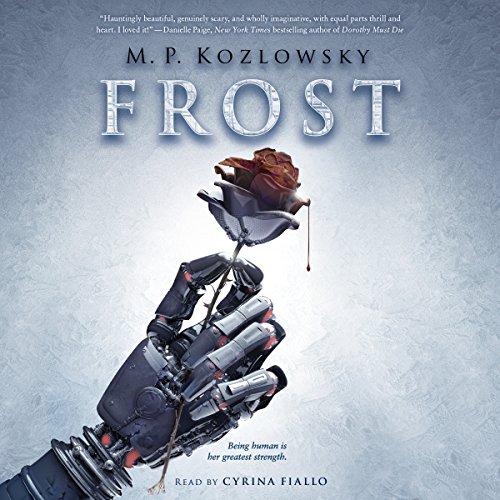 Cinder meets The Walking Dead in a chilling futuristic fairy tale that will reboot everything you thought about family, love, and what it means to be human.

Sixteen-year-old Frost understands why she's spent her entire life in an abandoned apartment building. The ruined streets below are hunting grounds for rogue robots and Eaters. She understands why she's never met a human besides her father. She even understands why he forbids her to look for medicine for her dying pet. But the thing is, it's not her real father giving the orders. It's his memories.

Before he died, Frost's father uploaded his consciousness into their robot servant. But the technology malfunctioned, and now her father fades in and out. So when Frost learns that there might be medicine on the other side of the ravaged city, she embarks on a dangerous journey to save the only living creature she loves.

With only a robot as a companion, Frost must face terrors of all sorts, from outrunning the vicious Eaters to talking to the first boy she's ever set eyes on. But can a girl who's seen the world only through books and dusty windows survive on her own?

What listeners say about Frost

Started off as 4 stars and ended at 2

This book is particularly hard to write a review of without spoilers, but I will.

It started off so well--I was interested in the characters and the world. Unfortunately, none really evolved to the satisfaction point (except her robot companion).

The whole book is about Frost trying to save her pet. And the lengths she goes to save this enormous animal they have to drag on an elevator door through a world where danger and death lurk around every corner became utterly ridiculous. The pet was dying of old age, yet Frost was willing to have every single person she encountered die so she could save what couldn't be saved.

And even more ridiculous is where she's taking her beloved pet. She's convinced that a place where she's seen a blue light is a small pocket of civilization--the world as it once was but even better because they will magically save her pet. Of course she has no proof that this place exists and neither does anyone else.

I don't mind an ambiguous ending if a book was good, but this book at least deserved a concrete ending if it's a standalone novel.

There are some good twists and turns--most you suspect but some you don't.

Would you listen to Frost again? Why?

I would only re-listen because of the narrator. She did a great job voicing so many characters and robots.

Most interesting aspect of the story is the exploration of what exactly makes a human, human? The least interesting is when the main character seems to act naïve or just gives up. You just want to shout at times, "MOVE!" or "DO SOMETHING!" It can be frustrating towards the end.

The ending of the book is when I wanted to listen to the entire story all at once. It was very interesting.

The author had a lot of great ideas within this book but there was something missing. I wish the main character towards the end was a bit stronger. I wish the ending was solid. The twist was fantastic! But it left me wondering, unsatisfied. I had a child who had to read this for a book report so I would say both teen boys and girls would enjoy reading this book, but they too have said it was missing something. However as an adult it's a fun short read.

The best book I have ever read

Right from the start of the book me and my wife were pulled in, with our love for animals and Frost being broken up about her beloved pet; we wept. Written with so much heart, truly is a new favorite.