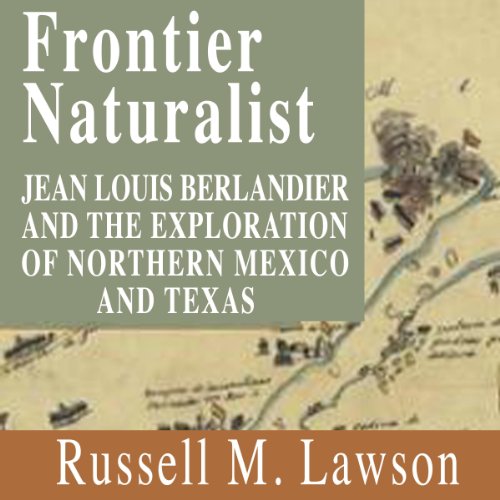 By: Russell M. Lawson
Narrated by: Jack Chekijian
Try for $0.00

This is a true story of discovery and discoverers in what was the northern frontier region of Mexico in the years before the Mexican War.

In 1826, when the story begins, the region was claimed by both Mexico and the United States. Neither country knew much about the lands crossed by such rivers as the Guadalupe, Brazos, Nueces, Trinity, and Rio Grande. Jean Louis Berlandier, a French naturalist, was part of a team sent out by the Mexican Boundary Commission to explore the area. His role was to collect specimens of flora and fauna and to record detailed observations of the landscapes and peoples through which the exploring party traveled.

His observations, including sketches and paintings of plants, landmarks, and American Indians, were the first compendium of scientific observations of the region to be collected and eventually published.

Here, historian Russell Lawson tells the story of this multinational expedition, using Berlandier's copious records as a way of conveying his view of the natural environment. Lawson's narrative allows us to peer over Berlandier's shoulder as he traveled and recorded his experiences. Berlandier and Lawson show us an America that no longer exists.

“A significant addition to the growing literature on the importance of scientific investigation on exploration of the American West.” (Clara Sue Kidwell, co-author of The Choctaws in Oklahoma)

What listeners say about Frontier Naturalist

An extremely fascinating read, even just for fun

In spite of being an obvious Publish or Perish, this endeavor is remarkably interesting and easy to assimilate. There is a distinct advantage to encountering it as an audiobook, besides the price, as there is no effort involved in sounding the multitudinous French or Spanish place names.
The subject of this volume is a scientific explorer who studied in Geneva, Switzerland and was commissioned to study and gather specimens in the Northern Mexico/Southern Texas area accompanied by a contingent of the Mexican army, along with various guides and laborers, starting out in 1826. Ever eager for more knowledge, he combined his skills in botany with those of cartography, zoology, ichthyology, meteorology, geology, geography, and ethnography of indigenous peoples. He further developed the skills of an apothecary and formulated a materia medica and an herbal for this new and unexplored land. He died unexpectedly by drowning in 1851, and all of his extensive writings and specimen collection were thought lost.
In 1853, Darius Couch obtained sponsorship from the Smithsonian and traveled to the area with the expectation of finding Berlandier's materials. He was able to purchase all with his own funds from the from the widow and set about replacing some of the specimens.
There is also a discourse on the various European contemporaries and their attitudes and prejudices, as well as a veritable Who's Who of US army generals who later attained high political office and other fame.
Although I do not speak French and have only medical Spanish, I feel that Narrator Jack seemed very comfortable with the very many pronunciations involved. As always, enunciation of all languages involved is clear, and voice quality is conducive to a pleasant read.
This book was gifted to me

Would you listen to Frontier Naturalist again? Why?

No, I received this book as a gift from the narrator, and while it was interesting, it's not a genre I normally read.

Well, the book is about Berlandier, so him

I like the way his voice modulates. He goes from conversational to lecturing easily.

This is an interesting story based in fact, using Berlandiers actual notes from his expeditions.

an interesting look at our geography...

I received this audio book as a gift in exchange for a honest and unbiased review. This book is interesting enough for a non fiction. I have always been fascinated by the Old West times. This book discusses the rivers, settlers, Indians and the ways of the past. Through the explorations with Jean Louis Berlandier, we see what they saw back them. The author, Russell M Lawson did a fine job on this book and had his research cut out for him. The narrator, Jack Chekijian did a great job delivering this book to us flawlessly as only he can, His voice is smooth and easy on the ears. Nothing makes me more grateful for how our lives are today more than hearing of how people had to do things in the past.

This reader was awful

It was painful to listen to this guy. His pronunciation of Spanish names and words was awful and he even managed to butcher some English words. For a while I though I was listening to a computerized voice.