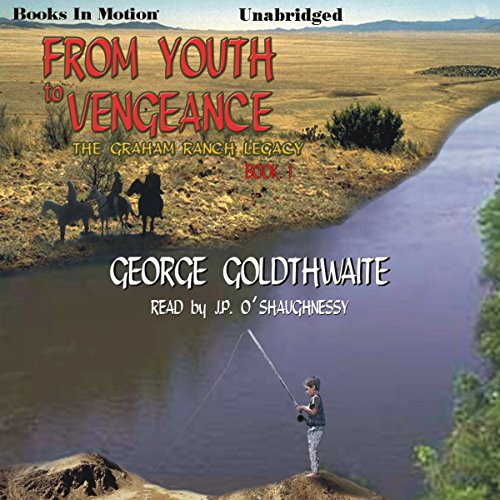 From Youth to Vengeance

By: George Goldthwaite
Narrated by: J. P. O'Shaughnessy
Try for $0.00

John Graham grows up on a rocky, cactus-infested ranch on the Texas Frontier located far west of settlements on the Colorado River. His childhood is cut short when the War Between the States forces him into manhood long before Mother Nature gives his body time to mature. Along with his friend Carlos, whose father works for the Graham Ranch, and Sammy, the orphaned son of escaped slaves, he takes on the responsibilities of running and defending the family homestead against marauding Comanches and the outlaw band of renegade Jonas Barnes.

After the war, Banes uses forged papers to join the carpet-bag government, inflates taxes, and threatens foreclosure on the ranch. Graham raises money by selling a herd of mustangs to a dishonest officer of the Juaristas, a rebel faction in Old Mexico fighting Emperor Maximillian. He dodges U.S. And French army patrols and rescues Carlos from conscription into the Mexican revolutionary forces.

With the ranch safe and Barnes in prison, they join a cattle drive, but Sammy is captured by Comanche and Carlos' father is killed. In Abilene, John meets the love of his life, Christina, but before he can return to the ranch and tell his parents, the escaped Barnes murders his mother and father and burns his home. A vengeance trail takes Graham on a tour as law-enforcement officer through Fort Worth Hell's Half Acre and Abilene, Kansas. Christina demands he choose between her hand in marriage or pursuit of the murderer, and rewards him with cozy home and a baby boy.

What listeners say about From Youth to Vengeance