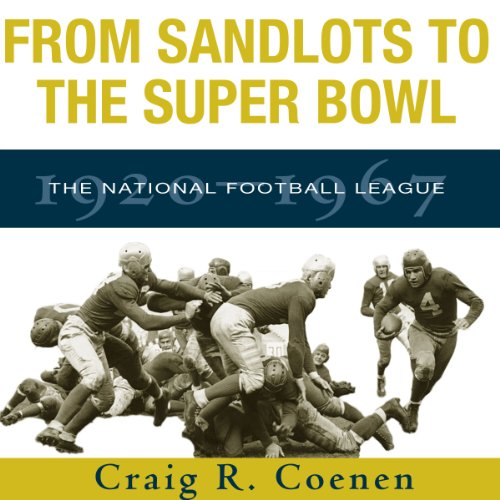 From Sandlots to the Super Bowl

The National Football League that celebrated its first Super Bowl in 1967 bore scant resemblance to the league of its obscure origins. In its earliest years, the league was a ragtag collection of locally supported small-town teams that generated attention only in the locales in which they played, if they were lucky. Many teams received no support at all.

Only after enduring a slow, often treacherous, journey did the enterprise of professional football reach its position as the king of the sports world by the late 1960s.

In From Sandlots to the Super Bowl, Craig R. Coenen recounts the NFL's ascension from a cash-strapped laughingstock to a perennial autumn obsession for millions of sports fans. It offers an in-depth summary of the NFL's early years and its struggles to build an identity. This book shows how the fledgling NFL of the 1920s and 1930s attempted to build support both on a local and national scale. Considered a sport of hooligans and lower-class athletes, professional football paled in comparison to the reputations of competing sports such as college football and professional baseball. Even more difficult for the league, developing civic support for franchises proved an almost impossible task. Teams would spring up and disappear overnight, generating hardly any notice among sports fans.

Coenen shows how the league's survival depended on small town franchises being able to tap into the civic pride and larger economic interests of nearby, growing urban centers. This book also details how the league faced challenges from rival leagues, the government, and at times, itself. Finally, it documents how the NFL mastered the use of new technologies like television to market itself, generate new revenue, and secure its financial future. This book approaches the history of the National Football League not only with stats and scores but with what happened beyond the gridiron. Starting in Canton and Massillon and ending in Los Angeles with Super Bowl I, From Sandlots to the Super Bowl offers an entertaining and absorbing look at the first five decades of America's most popular professional sport.

"Craig R. Coenen's book is a very welcome contribution to this area of scholarship." ( The American Historical Review)

What listeners say about From Sandlots to the Super Bowl

Incredible amount of information from civic to financial stats that are given throughout the book really painting the picture of the current NFL. Coenen really captures the investment and pride of each teams fans and cities.

this book is packed with a lot of wonderful information on the history of the NFL. It is good to hear about the early history and how the NFL transform into what we see today. however, the writer must have had a poor outline because he keeps going forward and backwards in time when he explains things. the narrator sounds like he is reading a book. you can tell when he comes to the bottom of the page or is about to turn the page with his awkward causes. this would easily be a 5star book otherwise.

required reading for any fan

I love football history and this book should be added to every library.

I hate how the modern game has evolved both on and off the field, this book reminds me that there was a time that football was a man's game .
great performance as well by the reader. I have listened to this many times now.

This is written more about an accountants guide to the story, rather than a fan's guide. Too detailed about financials, and too little stories about the guys who were the personalities.