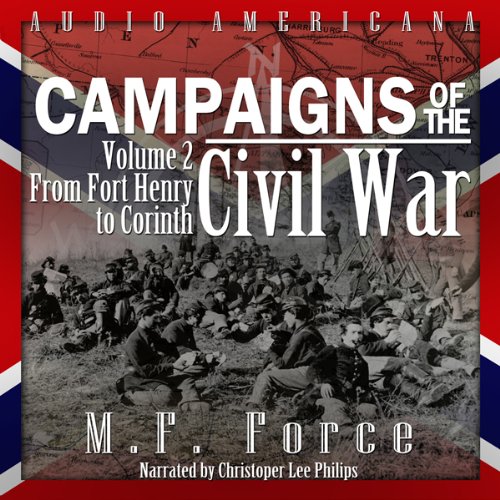 From Fort Henry to Corinth

The Campaigns of the Civil War series was originally published by Charles Scribner’s Sons in 1881-1883. A landmark of Civil War history, the series remains of keen interest to historians, re-enactors, and other Civil War enthusiasts for its detailed accounts of military and political affairs, as well as its portrayals of the soldiers and statesmen who waged the conflict. From Fort Henry to Corinth by M. F. Force is the second of 12 volumes in this series.

Author, soldier and later Medal of Honor recipient Force offers a meticulously rendered accounting of several major battles that took place during the first months of 1862, describing in minute detail the strength and positioning of forces under Union and Confederate commanders and the tactics and strategies employed on the battlefield by Generals Grant, Johnston, Beauregard, Buell, Wallace, and others.

Among the battles described in From Fort Henry to Corinth are the siege of Fort Donelson in Tennessee, where a then relatively obscure Brigadier General Ulysses S. Grant earned the sobriquet “Unconditional Surrender” Grant, and the bloody carnage of Shiloh, where the south suffered the loss of General Albert Sidney Johnston and an ultimately devastating military defeat.

What listeners say about From Fort Henry to Corinth

Put Me To Sleep

What would have made From Fort Henry to Corinth better?

The short version is - that it is possible to have a voice that is too deep and sonorous or resonant that it lulls one to sleep. In combination with the slow, deliberate, largely uninflected tone, it was too difficult to pay attention.