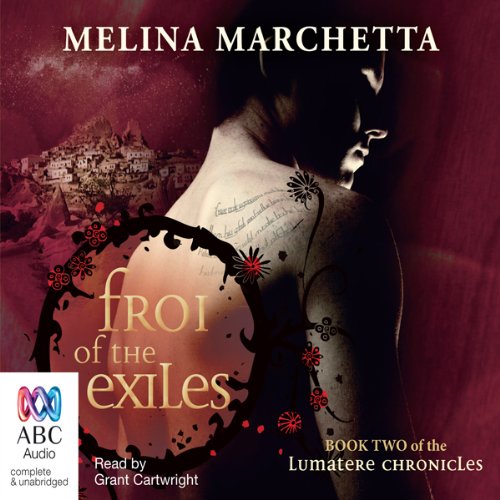 Froi of the Exiles

By: Melina Marchetta
Narrated by: Grant Cartwright
Try for $0.00

The curse on Lumatere has been lifted, but Froi's journey is just beginning.

The follow-up to Finnikin of the Rock, which made the 2011 YALSA Top Ten Best Fiction for Young Adults

Three years after the curse on Lumatere was lifted, Froi has found his home ... or so he believes. Fiercely loyal to the Queen and Finnikin, Froi has been trained roughly and lovingly by the Guard sworn to protect the royal family, and has learned to control his quick temper with a warrior's discipline. But when he is sent on a secretive mission to the kingdom of Charyn, nothing could have prepared him for what he finds. Here he encounters a damaged people who are not what they seem, and must unravel both the dark bonds of kinship and the mysteries of a half-mad princess.

In this barren and mysterious place, he will discover there is a song sleeping in his blood ... and though Froi would rather not, the time has come to listen.

What listeners say about Froi of the Exiles

Gets under your skin


The final two books in this series are narrated by a new voice actor from the first one, and although he doesn't have any really standout character voices like Wren did, he is also much better overall. He gets the pronunciation of everything right, the pacing is good and the emotions he infuses the dialogue with are incredibly moving. There was one section in particular that I relistened to about five times before I moved on because it was so powerful - part of that was the amazing writing, but the narration really enhanced it. I still don't know if I'd recommend listening to the audiobooks if you haven't actually read the series first, but maybe that's because I adored the experience of actually reading them so much. Basically, no matter how you get them, they're going to be good.

That First Audiobook is Hard to Match

As my title suggests, this was my very first step out into the big brave world of audiobooks. It took me a fair bit of finding, but I could not have chosen better.

I had not read Finnikin before embarking on this journey, but as expected that did not seem to matter. Marchetta did a fantastic job of brushing me up on the events from the first book and helping me to love all the characters without being too pushy or potentially repetitive with the re-cap.

This tale is fabulous, and Marchetta has quickly hit my list of authors worth exploring, but other reviewers might be able to cover that better than I. I want to impress upon you the talent of the lovely Grant Cartwright.

I'm sure that I would have loved this read regardless but Cartwright's strong narration was absolutely addictive. His character voices and expression never failed to deliver impact and feeling in the correct measures. His pauses, the suspense, his fervour...Now I find it hard to imagine Froi himself without the help of Cartwright... He was a perfect fit!

It'll be a difficult road in waiting for the next installment, Quintana of Charyn, but if Mr.Cartwright is drafted in again I certainly won't mind it.