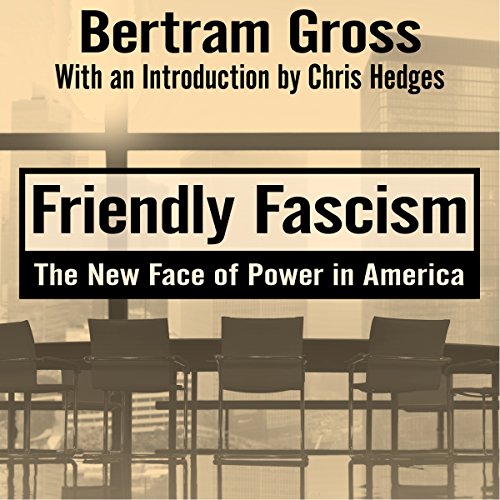 A look at corporate authoritarianism that William Shirer called, "the best thing I've ever seen on how America might go fascist democratically."

In 1980, US capitalist politics wore a "nice-guy mask", a troubling disguise to cover up a creeping despotism in which the ultra-rich and corporate overseers were merging with a centralized state power in order to manage the populace. This immanent corporate authoritarianism threatened to subvert constitutional democracy. But unlike the violent and sudden usurpations that led to fascism in the days of Hitler, Mussolini, and the Japanese empire builders, this new "smiling" American breed of fascism was gaining ground through gradual and silent infringements on the freedoms of the American people. First published over three decades ago, Friendly Fascism is uncannily predictive of the threats and realities of current political and economic power trends. Author Bertram Gross, a presidential adviser during the New Deal era, traces the history and logic of declining democracy in First World countries and pinpoints capitalist transnational growth and inappropriate responses to global crises as the sources of late 20th-century despotism in America. Gross issues ever-urgent warnings about what happens when big business and big government become bedfellows - chronic inflation, recurring recession, overt and hidden unemployment, the poisoning of the environment - and simultaneously proffers a practical shift of perspective that could help US citizens build a truer democracy. He imagines an America in which heroes are no longer needed and the leadership is a group of non-elitists who "recognize the ignorance of the wise as well as the wisdom of the ignorant".

What listeners say about Friendly Fascism

hard to believe this one fell by the wayside

don't get me wrong I love America I really do that's why I wanted her to be better.

The 1980s we're probably our last chance to turn this thing around, now... I don't think it can be done.

I think all the things he prophesied in this book that have come true dictate we're on a hopeless road & we've past the point of no return it's the matrix for us. not in the whole battery-powered sense of the word but in the control everything we see, eat, and breathe sense of the word/concept.
we're headed there right now and I don't think we've got a prayer of ducking our destiny...

I mean you know Obama lied to people and said he was getting us off that train and people believed him (I'm one of those disgraceful saps, but at least I had come around sufficiently by referendum time to vote for Gary Johnson in twelve...

i mean how far did hope change us? one step forward two steps back (and I'm dressed like a cat)

finally, as anyone with a modicum of intelligence knows to the core of their being is that, obviously Trump didn't do spit... I mean that's an even bigger joke than (I'm d-r-ing) Obama (Obama). w, (d--r-ing) Obama (Obama), and Trump are the hear no, see no, speak no of our glorious status quo... they were never going to be changing things. and anyone who was dumb enough to buy any of their lies (oh me, over here... Mrs. Cliffton) deserves to love in a Corona virus infected hellhole.

*****the truly obsequious/plaintive/please take me seriously guys schtick of our current admin says that if you gots to have gold plated stuff for the sake of ostentatious behavior***** might as well tattoo new money, trying too hard, and insecure right across their forehead that's the very definition of gold plated bathroom fixtures anything that's plate is garbage I don't care what it's on anyting plated is garbage no self-respecting human would have it in their home or would wearing on their body as jewelry and I'm not you know Richie Rich over here yeah I make $400 a week but I'm just saying I'm either going to have a real silverware set or I'm going to eat with the stuff I bought at the flea market I'm not going to go out and buy gold play the garbage okay okay this is getting to be a referendum on Trump and we're supposed to be talking about the book it really is hard to believe that the author didn't have the hindsight of today with some of the stuff really and truly it is particularly when considering that he wasn't really trying to prognosticate I mean you know anybody threatening about the past hopes to affect the future if you will but it's not like he wrote it you know saying this is going to happen this going to happen this is going to happen it just so happens that all the stuff he saw coming came to fruition and that's sad 1980 was our last shot...

P.S. at *****-----*****. I re edited that paragraph a couple times and it's just atrocious syntax and... *blech*. it is just a stupid review, of a tremendously important work, that started off totally adequate, (one too many rye highballs later) tried to pull a J. Gatz and got (((((((huge book ruining SPOILER ALERT BOOK RUINING SPOILER ALERT FOR THE GREAT GATSBY BY FRANCIS SCOTT KEY FITZGERALD. SPOILER ALERT)))))))


shot in the back literally the only time it ever even bothered to use that flippity flapping motherscratching doodie bird of a pool...

Prescient and very relevant to the present!

I love this book. It was very good at explaining and expanding upon complex concepts.

The book is still 100% relevant today.. and well articulated. I see it as an essential read.

I love the info that's in it because it totally relates to what happening today.

Interesting ‘read’ and really interesting to see how a book written many years ago, sometimes predicts what has happened today in society and in our government. Who know what will be of the US in the future. One thing for sure... as time goes on, we have less and less rights and more & more government control over our lives.

Was hopeful for the book. Unfortunately he ‘the prescient’ author was only prescient in terms of the propaganda on full display these days, but not it’s source - leftists. It is interesting how fascism is the new I don’t like you word. While the absolute definition is rooted in communism. Something this author I’m sure would disagree with. ‘Climate deniers are corporate shills’. He has his bias. And while the concept is interesting. He misses the mark. All of his left wing causes are being promoted by and in fascistic ways today. And the freedom of speech he treasures is assuredly only if you agree with him. Again he misses the mark. Cancel culture is the calling card of the left today. Disagree. Be destroyed. So while conceptually right. He is fundamentally wrong in that he attributes all of these to right leaning forces when in fact they are ALL left leaning forces. Ironically he is the propagandist here.

Highly recommended reading for everyone .. A real gem of a book.
Written in the 80's .. As relevant now as it was back then. Hope more and more people read it.

A rare book that ages so well and describes exactly the world we're living in.