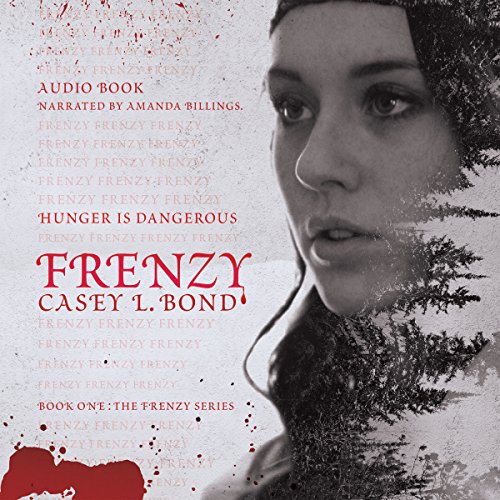 By: Casey L. Bond
Narrated by: Amanda Billings
Try for $0.00

After the world was ravaged by a viral apocalypse, Blackwater is one of the only colonies that remains. The survivors came together to create this safe haven. Nestled between a fierce river and a city's flood wall, the well-being of its residents hangs on a long-established treaty with the night-walkers. Sounds simple enough, but lately, the people of Blackwater have been dying, and the humans believe the night-walkers are to blame.

Porschia Grant starves for more than her parents' affection. Forced to enter the rotation, she will be given extra food rations in exchange for becoming a vampire's breakfast and dinner for a week. The rotation has an extra responsibility as well: leave the colony and enter the dangerous forest to hunt for food. A night-walker will protect the hunters from the infected that roam the woods. But with the treaty hanging in the balance and tension between the humans and vampires rising, anything could happen in the darkness.

What would you do if your only chance at survival might kill you?

What listeners say about Frenzy

the voice brought the story alive

What made the experience of listening to Frenzy the most enjoyable?

The voice reading. The woman reading, Amanda, brought the story alive. I had chills starting when I started to listen. She is the perfect voice for this story.

What does Amanda Billings bring to the story that you wouldn’t experience if you just read the book?

Amanda's voice is the character. It is just a different experience than if you read it.

I really enjoyed this dystopian, paranormal story. A virus devastated mankind, leaving decaying, ever hungry zombies behind. Lack of food and hunger drive both the uninfected humans and the vampires of Blackwater to form a treaty that allows the humans to hunt outside the safety of their home, guarded by the immune night walkers. Protection from the infected in exchange for a little human blood. This is the world Porschia Grant must survive in.
This is a fast paced, heart wrenching, exciting story of hunger, loss, desperation and the struggle to survive. Your heart aches for Porschia and many of the other characters throughout this story. The author keeps you off balance by never quite letting you know who the bad guy is and makes you flip as to who you like and who you don’t. Saul is a great character throughout and the narrator in the audiobook does a good job of making you feel his growing attraction and protectiveness of Porschia and the obsessive hunger of Roman. Her voice suited the story and made the characters easily distinguishable but the intermittent changes in volume in the narration was a bit irritating. I loved Mrs Dillinger and Ford, and the cruelty and instability of Proschia’s mother came through well. The timeline between the beginning of the infection and present day is a bit murky, as Mrs D. explains that it has been more than 80 years and yet when Porschia and Tage scavenge in the city it still smelt of the fires that burned and the clothes were still intact. This is a minor detail and it doesn’t distract from the thrilling storyline and the breath holding ending of book one. I can not wait to listen to the next in the series.

Loved this tale! A completely different world from those I frequently visit involving vampires. I was in constant wonder as to what would happen next? Waiting for a twist to reveal a tragic love story or savage monster making himself/herself known to all I had no idea what to expect. I am so ready for book 2! I must know what is to come!!

As for the performance, the only annoyance I had was that the narrator would get louder or quieter randomly. It was like she was constantly getting closer/farther from the mic. Other than that the narration held my full attention.

It left me hungry for more!

I would definitely recommend this audiobook to a friend. I read the ebook first and then followed up with the audio as a refresher before starting book 2 in the series. This is my first look at Casey L. Bond and i gotta say i was impressed. She immersed me into a unique dystopian world filled with zombies and vampires.

What was one of the most memorable moments of Frenzy?

One of the most memorable moments in the story is when Porchia's mom burns all her sisters belongs out of hatred, spite, and loss. This woman is a total B**CH. But at the same time, you lament with their loss.

As the narrator, Amanda Billings, made me fall in love with the story all over again. She did a great job conveying the MC's (Porchia) feeling through her words.

I listened to this while driving, and managed to miss a well known turn, because I was so into the story! You really feel the main character's pain, anguish, and fear.

There were a couple of moments that had a little muffle on the audio, but other than that, it was a beautiful performance. I'd definitely recommend this one!

I've always loved reading Casey's books but listening to the audio was so much more lively. I was hooked from the start and the way the plot twists roll out always made me sad when I'd have to leave the book to do stuff. Especially the last few chapters....oh my stars. i need more

I absolutely love this series.. I've read the entire series and decided I just had to listen to the Audiobook too.. It's Amazing!! The Narrator does an amazing job with the story..

I love this story!! It is very well written and keeps you hooked wanting to know more. Your heart goes out to Porschia. The narrator was great, but I feel a male and female narrator would make it even better if that is possible. Over all I highly recommend this read!!

I loved listening to this audio of Frenzy. I loved the story and the way it unfolded. I enjoyed the Narrator Amanda Billings way of narrating . I loved listening this story. The tale of humans and vampires and a delicate balance. Really enjoyable.

First book I ever listened to

I absolutely loved this whole series...This is the first book i listened to and I loved it..Wether you read or listen this is a great series!!! I will definitely be listening to more..