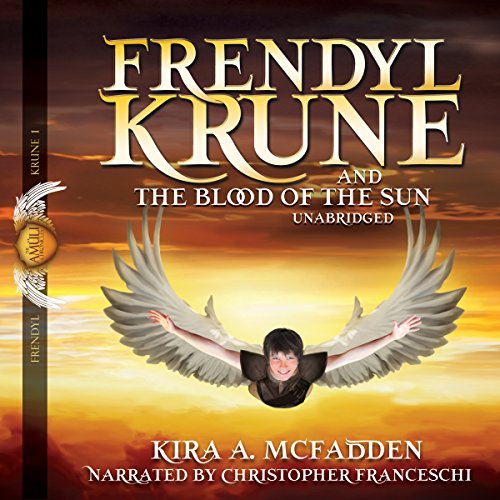 By: Kira A. McFadden
Narrated by: Christopher Franceschi
Free with a 30-day trial

Frendyl Krune wants to be a knight, to serve his family and his people and never fear what may come for him. His goal, however, slips from his grasp when rumors spread that his father possesses a rare and powerful gem. It doesn't take long for someone to break into his family's estate, determined to steal the gem.

As Frendyl winds through the catacombs in search of the would-be thief, he discovers the intruder broke down the magical barrier of the prison and used magic to sneak in and out of the Krune estate without being seen.

To make matters worse, Frendyl learns his father's control over the city is failing. Talk of revolt scurries through the streets like vermin. If nothing is done, Frendyl's father will be ousted from power.

To save his family and unite his people, Frendyl joins his Uncle Melroc's quest for the long-lost gem, the Blood of the Sun. The stone has powerful magical properties, and Frendyl's father needs it to track down an escaped convict - or so he claims. But, Frendyl's father isn't the only one who desires the gem. Others, including a thief on Frendyl's voyage, will do anything to get their hands on the Blood of the Sun. Anything - including locking Frendyl in a vault of solid rock.

Story was over done, and far too many of the standard fantasy tropes/twists. the narrator was great though!

It is an engaging story for readers of all ages. Once started, I couldn't stop listening. The reader's voice created suspense and kept me hanging on to see what would happen next. Great escape!

His voice was easy to listen to and made the story more engaging. I can't wait to hear him read again. Great inflections and his tone was perfect for the book. It was exciting to listen to him. Would listen to any of his performance's.