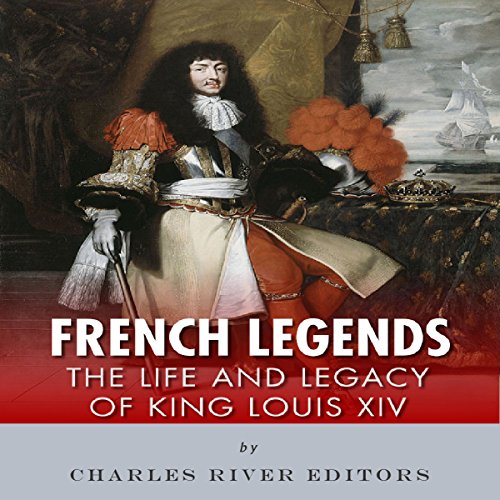 French Legends: The Life and Legacy of King Louis XIV

French Legends: The Life and Legacy of King Louis XIV

"Every time I create an appointment, I create a hundred malcontents and one ingrate." (Louis XIV)

A lot of ink has been spilled covering the lives of history's most influential figures, but how much of the forest is lost for the trees? In Charles River Editors' French Legends series, listeners can get caught up to speed on the lives of France's most important men and women in the time it takes to finish a commute, while learning interesting facts long forgotten or never known.

France's most famous king, and Europe's longest serving, Louis XIV (1638-1715) is often viewed today as a symbol of royal extravagance and splendor. Reigning for over 72 years, the legacy of the "Sun King" is remembered for the magnificent Palace of Versailles, the patronizing of arts and theater, and the apocryphal quote "l'Etat c'est moi" (I am the State).

Although it is more than fair to associate the Sun King with vanity and unfathomable spending on luxury, the laser-sharp focus on the superficial aspects of the man and his reign have come to overshadow just how effective he was as a ruler. Becoming king as a child and assuming actual power in his early 20s, Louis spent nearly 55 years centralizing and consolidating power in his monarchy by bringing the aristocracy to heel and keeping religious divisions from devolving into violence, thereby passing off to his successor an absolute monarchy with a very solid foundation. At the same time, his foreign policies, though often criticized as quests for glory, helped establish France as the dominant power on the European continent and firmly in control of an overseas colonial empire that stretched both east and west.

Not appropriate for children

What disappointed you about French Legends: The Life and Legacy of King Louis XIV?

I homeschool and downloaded this for a lesson for my children, ages 4-10, because we have used and enjoyed several other titles by Charles River Editors. The brevity and simplicity of writing gave me the impression that my children fell into the intended audience.
I was deeply disappointed that this biography of King Louis XIV talked excessively about his sexual encounters, with barely veiled language. We will not be using materials from Charles River Editors in the future.