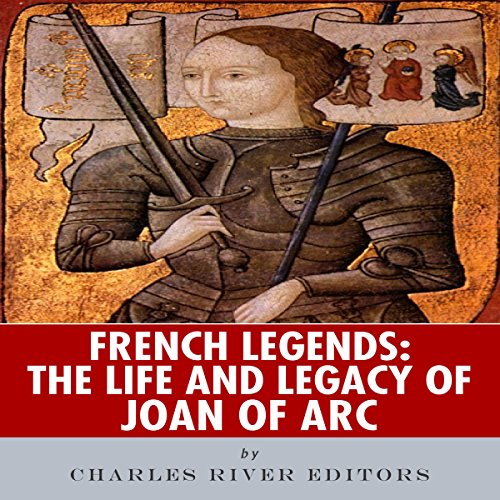 French Legends: The Life and Legacy of Joan of Arc

French Legends: The Life and Legacy of Joan of Arc

"King of England, if you do not do these things, I am the commander of the military; and in whatever place I shall find your men in France, I will make them flee the country, whether they wish to or not." (Joan of Arc)

A lot of ink has been spilled covering the lives of history's most influential figures, but how much of the forest is lost for the trees? In Charles River Editors' French series, listeners can get caught up to speed on the lives of France's most important men and women in the time it takes to finish a commute, while learning interesting facts long forgotten or never known.

Joan of Arc is one of the most famous women in history: a French folk legend, a Catholic saint, and a military heroine. Yet almost nothing is truly known about the Maid of Orleans besides her ultimate fate - being burned at the stake when she was still a teenager.

The Hundred Years' War between France and England was one of the great wars of the feudal ages, a conflict literally spanning a century, in which an untold number of men on each side died. That makes it all the more amazing that a teenaged peasant girl came to the front lines. Claiming God instructed her to save France from England, she convinced the uncrowned Charles to send her to the siege of Orleans, and she subsequently led the French army to a string of important victories that made it possible for Charles VII to be coronated as the king of France. Joan then exited the stage almost as quickly as she entered it, being captured by the Burgundians and handed over to the English to be put to death for heresy.

Over the centuries the memory of Joan of Arc has been firmly embedded in French lore, where she is still constantly invoked, and she remains a staple of world history and pop culture.

Short and to the point, summarized historical story of Joan the Arc. Nothing spectacular but if you are into history and not too much into reading a volume, then this will give you a bit of a taste for knowledge on the subject.