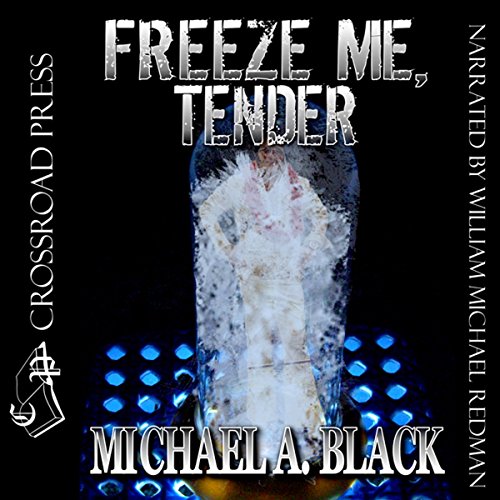 By: Michael A. Black
Narrated by: William Michael Redman

Ten years ago the hillbilly king of rock-and-roll, Colton Purcell, was cryogenically frozen after his premature death. Or was he? Chicago-based magazine reporter Harry Bauer intends to find out as he becomes involved in a convoluted murder plot stretching from good-old Memphis to glitzy Las Vegas, where the 10th anniversary celebration of Colton's death is in full swing. When Harry's mentor and friend, a Vegas reporter specializing in conspiracy theories, turns up murdered, Harry is intent on finding out why. But in a city where illusion often transcends reality, the truth proves more elusive than a gambler's lucky streak.

Not only is there a huge Colton imitator contest going on, but the King's only daughter is set to marry the epicene Prince of Latino Pop (despite her mother's objections), and a mysterious young man has introduced himself to Harry, claiming to be Colton's illegitimate son. The trail leads Harry to the dark side of sin city, crossing paths with a bunch of mob guys, a very efficient (and very large) contract killer, and some unexpected people from Colton Purcell's past.

There's also the murder of Colton's famous manager, the abduction of a mysterious figure from a Memphis nursing home, and a host of other problems that make Harry begin to wonder: Is it really Colton Purcell hanging upside down in that cryogenic tube full of liquid nitrogen? If Harry can live long enough, he may just find out.

I am surprised at how much I enjoyed this!

Yes - this was such a silly title - but the book is a no stress mystery with some feel good characters and lots of play on what we have all read in the news many years past.

Not surprising - but I don't think that the author intended any surprises. The book is like a long conversation with an amusing friend that my have had too much sugar in the last 8 hours.

What does William Michael Redman bring to the story that you wouldn’t experience if you just read the book?

I don't know. I will have to read the book - which I think will be fun, too.

Did Freeze Me, Tender inspire you to do anything?

Yes. I called a friend and we went to see the latest king of the blow up movies (a good day to die hard - which was amazing by the way)

I will read and listen to a few more of his books. Also I will go to see some of the movies that they showed trailors for at the die hard move. except i can't remember the titles.