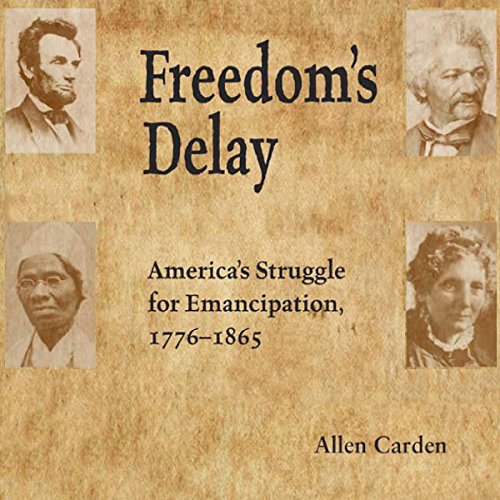 This work fills an important gap in the literature of slavery's demise. Unlike other authors who focus largely on specific time periods or regional areas, Allen Carden presents a thematically structured national synthesis of emancipation. Freedom's Delay offers a comprehensive and unique overview of the process of manumission commencing in 1776 when slavery was a national institution, not just the southern experience known historically by most Americans. In this volume, the entire country is examined, and major emancipatory efforts - political, literary, legal, moral, and social - made by black and white, free and enslaved individuals are documented over the years from independence through the ratification of the 13th Amendment.

Freedom's Delay dispels many of the myths about slavery and abolition, including that racial servitude was of little consequence in the North, and, where it did exist, it ended quickly and easily; that abolition was a white man's cause and blacks were passive recipients of liberty; that the South seceded primarily to protect states' rights, not slavery; and that the North fought the Civil War primarily to end the subjugation of African Americans. By putting these misunderstandings aside, this book reveals what actually transpired in the fight for human rights during this critical era. Carden's inclusion of a cogent preface and epilogue assures that Freedom's Delay will find a significant place in the literature of American slavery and freedom.

" Freedom's Delay is really the first effort to bring together in one volume the entire history of the formal struggle to end slavery in the United States." (Joanne Melish, author of Disowning Slavery: Gradual Emancipation and 'Race' in New England, 1789 - 1860)