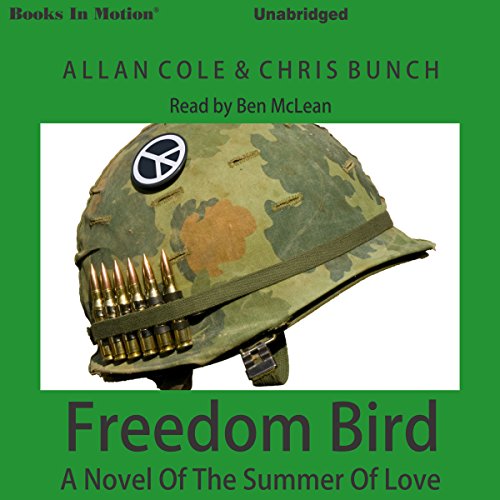 A Novel of the Summer of Love
By: Allan Cole, Chris Bunch
Narrated by: Ben McLean
Length: 13 hrs and 15 mins
Categories: Literature & Fiction, Genre Fiction
4 out of 5 stars 4.3 (4 ratings)

By: Allan Cole,Chris Bunch
Narrated by: Ben McLean
Free with a 30-day trial

During the Vietnam War, GIs who managed to survive their tour of duty in one piece - more or less - were flown home in chartered airliners. They called those planes "Freedom Birds". This is the story of three young men - from wildly different backgrounds - who meet on such a plane and make a pact to spend three days together in San Francisco. Their goal: to spend every cent of their mustering out money in a party of a lifetime. And they'll get more than they bargained for, because when they land, it is July 1967 - in a time that would come to be known as "the summer of love". A place and time where each young man will have to confront the ghosts who followed them home from the jungles of Vietnam and contemplate a future none of them had imagined.

What listeners say about Freedom Bird