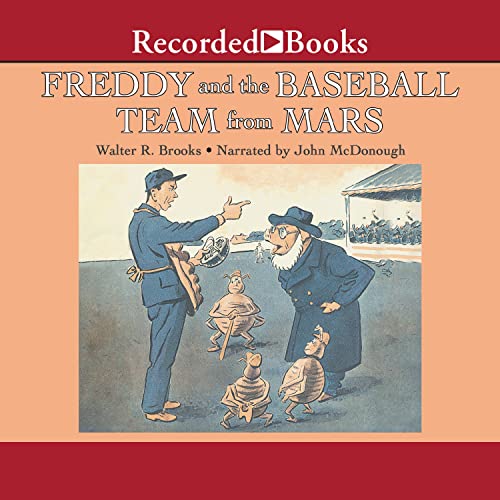 Freddy and the Baseball Team from Mars

By: Walter Brooks
Narrated by: John McDonough
Try for $0.00

Mr. Boorschmidt's Stupendous and Unexcelled Circus is back in town. This time, one of its attractions is really out of this world. In the big ring are six Martians and their flying saucer! But Boorschmidt doesn't stop there. He wants something even more spectacular to offer the audience, so he asks Freddy for help.

Freddy knows what to do. He organizes an amazing baseball team. With the help of the other animals from Bean Farm, Freddy will teach the Martians, an elephant, an ostrich, and Mr. Boorschmidt to play ball. What will the other teams think of this strange group?

The Freddy the Pig books, written between 1927 and 1955, are childhood classics that have been called the American equivalent of the Pooh series. With John McDonough's warm narrations, the Freddy books are now attracting an enthusiastic new generation of fans.

What listeners say about Freddy and the Baseball Team from Mars

love all the Freddie audio books, they are great for passing time. I need to buy all of them!

this book is a classic and so well performed

love this black and the whole series of Freddy the pig on your detective is one of my all-time favorites! and here I am 65 saying this LOL! and John McDonagh is a fabulous performer!

This is a great story and if you like animals you will probably like this story. It is a very fun and funny story .

Freddy is one of my favorite books because it has a little mystery, a lot of humor, and talking animals. This is a great book and I would definitely recomend it.

It's captivating, thrilling and downright hilarious. Definitely a must read for kids. When I was little my mom picked it up from the library and my brother and I loved it. We rented it over and over again. Years later I discovered that it was one in a series, one that I am happy to share with my kids.