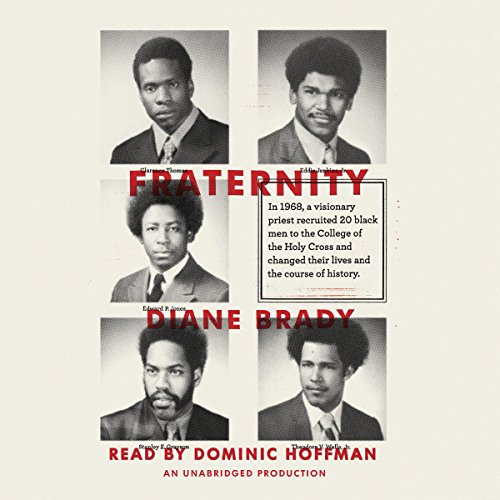 In 1968, a visionary priest recruited 20 black men to the College of the Holy Cross and changed their lives and the course of history.
By: Diane Brady
Narrated by: Dominic Hoffman
Length: 7 hrs and 53 mins
Categories: History, Political
4.5 out of 5 stars 4.3 (34 ratings)

On April 4, 1968, the death of Martin Luther King, Jr., shocked the nation. Later that month, the Reverend John Brooks, a professor of theology at the College of the Holy Cross who shared Dr. King’s dream of an integrated society, drove up and down the East Coast searching for African American high school students to recruit to the school, young men he felt had the potential to succeed if given an opportunity. Among the twenty students he had a hand in recruiting that year were Clarence Thomas, the future Supreme Court justice; Edward P. Jones, who would go on to win a Pulitzer Prize for literature; and Theodore Wells, who would become one of the nation’s most successful defense attorneys. Many of the others went on to become stars in their fields as well.

In Fraternity, Diane Brady follows five of the men through their college years. Not only did the future president of Holy Cross convince the young men to attend the school, he also obtained full scholarships to support them, and then mentored, defended, coached, and befriended them through an often challenging four years of college, pushing them to reach for goals that would sustain them as adults.

Would these young men have become the leaders they are today without Father Brooks’s involvement? Fraternity is a triumphant testament to the power of education and mentorship, and a compelling argument for the difference one person can make in the lives of others.

“Holy Cross, Black Power, and the Sixties could have been an unholy mix. A bold Jesuit priest made it a holy one. The story of Father John Brooks, Clarence Thomas, Ted Wells, and the others rings with power, pride, and human feeling. Fraternity and the saga it retells adds honor to my college.” (Chris Matthews, anchor, MSNBC’s Hardball with Chris Matthews)
“Diane Brady’s book brilliantly shows how the attention and concern of one man changed not only the course of these individual lives but the course of history. This book is a template of how we should all think about both our societal responsibility and the gift of mentorship.” (Wes Moore, author of The Other Wes Moore)
“An incredibly inspiring book... Diane Brady has captured the story not just of a group of amazing black men and their mentor but of an era. But most of all, Fraternity is about the power of hope, the power of presence in the lives of others, the power of mentorship, role modeling, and actionable belief. And this is why I see this book as the best modern-day example of the continued power of Dr. King’s Dream.” (John Hope Bryant, founder and CEO of Operation HOPE and author of Love Leadership: The New Way to Lead in a Fear-Based World)

This is a fantastic story about what a black man can accomplish when someone believes in him.. I have a personal insight since I was a high school friend of one of the young men featured here: high profile criminal defense attorney, Theodore V. Wells. Growing up in the 1960s as an honor student with "Tokey" at Coolidge High School in Washington DC, I always knew he would be successful with his great leadership skills and personal charisma. Many of our school mates became top black lawyers and doctors. But I am blown away by Tokey's ultimate career accomplishments.

This story is a well-researched account of the outstanding journey of 5 young black men recruited by Rev. John Brooks during a racially charged period on U.S. history to achieve the dream of Dr. Martin Luther King. Brooks saw that a select group of black students got scholarships to a top university, kept his foot in their butts during college, and followed their subsequent careers while providing mentoring and support. For once we are not being treated to yet another "rags to riches to rags" story about a black man who was given a chance to do something great only to end up shot dead in a crack house. Tokey, Supreme Court Justice Clarence Thomas, Pulitzer Prize winner Edward P. Jones and the two others in this book are proud examples of what can be accomplished with the help of people who really care about this country. Well done, Rev. Brooks! And, Tokey, I am so very proud of you!'

12 of 15 people found this review helpful

What made the experience of listening to Fraternity the most enjoyable?

I enjoyed the reading. I could sense the intensity, apprehension and overall triumph these students felt throughout the book.

I like the clarity of context. Even though this was 50 years ago I understood the surroundings and experienced the transition these student had to make. I related completely to their challenge as my own was similar...only 20 years later.

What does Dominic Hoffman bring to the story that you wouldn’t experience if you just read the book?

The subtlety of Hoffman's read gave me a sense of the sincerity the white students, Dean, President and the community had in interacting with these new students and how they effected their lives in such memorable ways.

Clarence Thomas is as he is today because this is how he was then.

This is a great account of the world of Holy Cross and the young men that walked on it campus in the late 1960s.