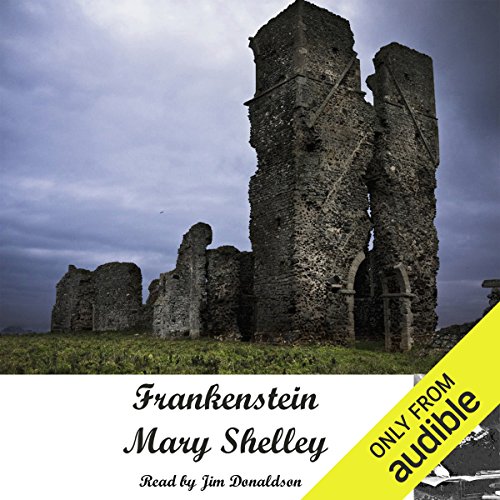 By: Mary Wollstonecraft Shelley
Narrated by: Jim Donaldson
Try for $0.00

Frankenstein is infused with some elements of the Gothic novel and the Romantic movement and is also considered to be one of the earliest examples of science fiction. Includes introduction and commentary by Mary Shelley. Required reading for any fan of science fiction and horror genres. A classic.

What listeners say about Frankenstein

Great performance of a timeless classic

Jim Donaldson does a great job with the narration of "Frankenstein." Every character has its own distinctive voice (with the exception of the namesake doctor, whose voice changes when the point of view shifts from third- to first-person and back). My only wish would have been that they had hired a female to read Mary Shelley's introduction.

Please note that there are four "doubled-up" lines in this performance that should have been caught during editing, which gives the impression that the Audible player "skipped." No skipping...just a couple of line re-reads. Almost all of them are near the beginning, and one is about three-quarters of the way through, so they're needle-in-a-haystack things at best.

A Monster of Fiction

Love the complexity of Shelley's narrative and the poetry of her prose. Jim does a good job of narrating this monster.

A Very Good Performance of a Classic Novel

This audiobook was actually my first complete experience of this novel. I'd started it a couple of times, but it's very hard for me to read printed text, listening to prose is so much easier for me.

So anyway, the novel is very, very perfect. This edition, I think, is very well done. The narrator does a great job with all of the characters. Sometimes, especially in older novels, some of the female characters done by male narrators seem kind of put on, as do almost any character with any type of an accent.

But this narrator does a very, very good job. The different accents are bold and authentic and done with an air of meaning and authority that I really, really liked.

I think he does a great job reading this classic novel, making it very enjoyable and very accessible.

Now I know why this is a "classic"

What did you love best about Frankenstein?

The battle of wills between creator and his creation. Just like any fantasy you need to give the author permission to take you on a ride. This was surprisingly quite a strong story, even if the science behind its premise is dubious, particularly well over a century after its writing.

The "monster". I did not realise he was a creature of such humanity and need. The story was still in my thoughts a week or so after finishing it.

Have you listened to any of Jim Donaldson’s other performances before? How does this one compare?

No. I was expecting a poor performance as it was priced lower than other versions of the book, but it was read very well and would definitely happily listen to the narrator again.

No, but I did get through it very quickly and was always grateful for a chance to get back in the car and renew the story.One exception - The beginning of the book is told in letters, and apart from perhaps the final 2 letters, the rest are completely irrelevant to the story, and why they were part of the published book is a mystery to me.

There are a couple of random instances where the narration repeats itself for a few words. Although its very minor and probably only totals maybe 15-20 seconds over the entire book, its the worst editing I've encountered on Audible. (That comment is not aimed at putting people off this version of the book - I definitely recommend this book).

The book itself is wonderful. The narrator, Jim Donaldson, is amazing. He adds great voice changes and wonderful listening. I look forward to finding other books he reads on audible.

There's a reason this book is a classic!

I was required to read this book for my a English class, but I just didn't have time to stop and read. With an audiobook, however, I was able to drive and enjoy a wonderful, heart-tugging story that makes you think. I loved it!

Observations On Character, Setting and Perspective

Some Observations on Character, Setting and Perspective

CHARACTER
One of the novel's main themes is the unjust treatment towards the supposedly monstrous, towards someone or something that is different; in this case physically different. However, while the Monster is certainly a physically revolting abomination, he is not necessarily a moral monster or, at least, not an unreasonable monster. Indeed, the Monster’s immoral crimes and faults can be seen not necessarily as his own but are the consequence of his being so thoroughly ostracized.

Despite the Monster’s physical deformities, it is Dr. Frankenstein who proves himself the more monstrous, ill receptive and unreasonable. It is Dr. Frankenstein who cannot get past his creation's horrible, physical nature, to sympathize with or at least listen to his creation's plight. This seemingly contradictory interaction between one who is reasonable but physically repulsive, and one who is unreasonable but physically normal, helps to communicate the novel's main theme of the unjustly accused monster.

The language that Dr. Frankenstein uses about and towards his creation is consistently inflammatory: ‘wretch; too horrible for human eyes; vile insect; abhorred monster; fiend; devil; detested’. On the other hand, the Monster, attempting to create a dialogue with and appeal to Dr. Frankenstein, uses mitigating, reasoning, empathetic language: ‘thou are bound by ties; do your duty towards me; comply with my conditions; be calm; I entreat you; I will be even mild and docile; justice; clemency and affection; benevolent and good; virtuous; entreaties’.

Not just for the sake of a richer, more interesting read are Dr. Frankenstein and his Monster not simple, one-dimensional characters but, in order to further illustrate the main theme of the novel, they are also multifaceted and oxymoronic. By contrasting the Monster’s physically freakish appearance and Dr. Frankenstein’s obstinate refusal to accept him as anything but a devil, with the Monster’s fluency and sound reason, Shelley here brings home her novel’s theme of, ‘don’t judge a book by its cover’, so to speak.

SETTING
One important setting is deep in the French Alps. The introductory chapter to the French Alps setting especially abounds with descriptions of the glacial mountain-scape, but even during the dialogue between Frankenstein and his creation there are ample descriptions of its awe-inspiring, fearful nature: 'the crevices in the ice; the cold gale; the temperature of the place is not fitting to your fine sensations; snowy precipices; the air was cold, and the rain again began to descend'.

There is an ironic difference between how Dr. Frankenstein and the Monster experience this setting. To Dr. Frankenstein it is hostile and uninhabitable, but to the Monster it is homely: “the desert mountains and dreary glaciers are my refuge... the caves of ice, which I only do not fear, are a dwelling to me... These bleak skies I hail...”. That the Monster can make a comfortable dwelling of what we would certainly find, and which Shelley’s language describes as, an inhospitable wasteland, exemplifies the Monster’s inhuman or otherworldly nature.

PERSPECTIVE
This novel is largely written from the first-person perspective of Dr. Frankenstein and, because of this, the Monster can only be described to us through Frankenstein’s particular viewpoint. Shelley’s task is to describe and illustrate the Monster’s virtue to us strictly through what he says and does to Dr. Frankenstein, since it is only through Dr. Frankenstein’s inner monologue that we come to know the Monster. Dr. Frankenstein, however, is an unreliable narrator. He is furious and hysterical, albeit not without good reason, and seems eager to sooner engage in “mortal combat” with his enemy than heed his words.

On the other hand, the convincingly persuasive and reasonable language that the Monster uses would make him seem more of a classical rhetorician than a brute beast. In light of all the Monster’s eloquence is revealed the biases and unreasonable, malicious ill will present in Dr. Frankenstein’s first-person narration. This again supports the theme, ‘don’t judge a book by its cover’. If the reader had up to this point the idea of the monster as nothing but pure evil, their misconceptions might also be dispelled along with the character of Dr. Frankenstein who, as it were, concedes to the Monster’s request and follows him to the hut to listen to his story.

Also, I think that the cold settings in much of the novel serve as a metaphor for the cold, emotionally detached sterility of the scientific method.

Loved it - Scarier than the Movies

This was very suspenseful. Even though the exposition at the beginning was a bit slow, by the time you get to chapter 13, the story starts moving and you're hooked.

Shelly builds the story slowly. By the time disaster strikes, you care about each of the characters.

I listened because I wanted to check a classic book off my list. I was surprised by thoroughly enjoying it. It's too bad the movies didn't follow the original story.

I hadn't read Frankenstein since high school and wanted to revisit. The Branaugh reading looked tempting (his movie rendition was great) but it was abridged. Fortunately Jim Donaldson read this unabridged version with aplomb. His voicing for "the monster" is imbued with gravelly strength and suffering befitting it and he gives the reactions of the characters the tonal attention they deserve.

The story is rightly a classic, but the recording is dreadful. Try another version!