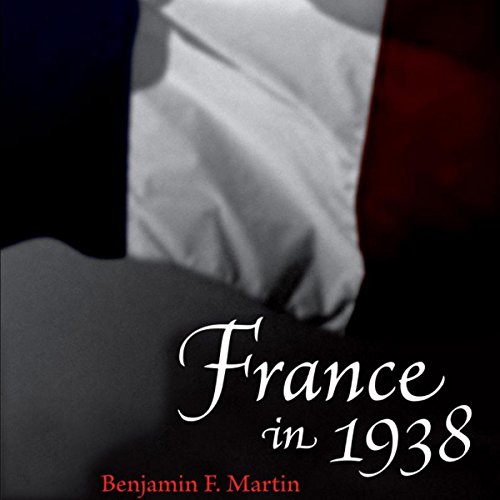 By: Benjamin F. Martin
Narrated by: David Stifel
Try for $0.00

At the beginning of 1938, containment of Nazi Germany by a coalition of eastern and western democracies without resorting to war was still a distinct possibility. By the end of 1938, however, Germany was much stronger, the western democracies stood alone, and war was all but certain. The primary cause for these developments, argues Benjamin F. Martin, was the foreign and domestic policies adopted by the French government and embraced by the French people.

In a riveting account of the dark days leading up to France's defeat and occupation, Martin reveals a great and civilized nation committing a kind of suicide in 1938. When the relative calm in the first quarter ends with Germany's invasion of Austria, France is faced with hard questions about its diplomatic and military posture, and the leftist political alliance called the Popular Front makes its last stand.

In the second quarter, a sense of doom begins to spread, reflected in the year's films noir, such as Marcel Carné's The Port of Shadows. France and Britain capitulate to Hitler at the Munich conference in September, described by Jean-Paul Sartre in his novel, The Reprieve. During the fall, the government aggressively confronts Fascist Italy and labor militancy, thereby retrieving, on the cheap, a sense of dignity. Martin concludes by looking back on the cost of decisions made in 1938 from the perspective of 1940.

Exhibiting his trademark compelling narrative style, sense for unusual and telling detail, and vivid portraits of individual men and women, Martin brings remarkable texture to this depiction of a society and period. He recreates life in France during the year when terrors to come could already be imagined only too well.

What listeners say about France in 1938

The Spoils of Cowardice

While meandering at times (2 chapters waste time telling you the plot of films of the period) it does successfully impart, by its end, the atmosphere in which appeasement flourished. The world of 1938 is one of fear and apprehension, and explains why France's morale was so lacking when the war did come about. Her lack of national unity, her reluctance to resist German domination and her increasingly insecure foreign policy are all discussed at length.