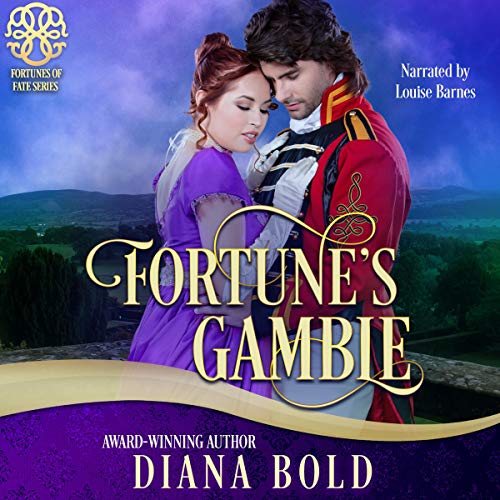 By: Diana Bold,Fortune's Of Fate
Narrated by: Louise Barnes
Try for $0.00

Christian Barnes never meant to steal his half-brother's identity, but when Major Andrew Bradford, Viscount Trowbridge, falls at Waterloo, Christian grabs his chance at the life he should have had as his father's oldest son. He and Andrew could have been twins, and he knows he'll get better care for his own wounds as a major than a private. The masquerade is so successful, he continues it once he returns to England. However, he hadn't prepared for Rebecca Davenport, the fiancee Andrew had left behind.

Lady Rebecca Davenport imedialtely realizes that Andrew has returned to her a different man. She just isn't quite sure if it's the years he's spent at war that have changed him. But as her suspicions grow, she realizes that the changes are welcome. This man is much better than the one she used to know. But can she hold her tongue and actually marry this imposter?

What listeners say about Fortune's Gamble

Mistaken Identity or not

This was a very enjoyable book. The narrator was wonderful. Christian Barnes is the bastard son of a Viscount. When he sees his half brother, Andrew die at Waterloo, he takes his place. You see, they look like twins and he only wants to get his wounds tended to and make some money, no one will know. He also doesn't know he has a fiance at home. Will she be able to tell, he is not Andrew, before he calls the wedding off.

I loved this audiobook! How the story unfolds, all the aspects of trying to fit it all in and the ending was lovely! Narrator did a wonderful job as well.

Christian has some fires to put out that Andrew left burning when he went to war! Andrew was not a very nice human being at all. The more I found out about Andy, the more I'm sure his death was a blessing. See how many catch on and if someone gives him up!!?? I voluntarily listened to a free copy of this and am giving an honest review. The narrator did a good job.

This book was a very good listen. The story kept my attention and I had to know what would happen next! It was a very sweet romance with some twists and turns that keep you engaged. The narrator has a lovely voice and was a really good choice for this book. She really made this, my first audible book I’ve listened to, a great experience!

I loved everything about this book. They story was wonderful with an awesome ending. Rebecca and Andrew/Christian had a true love story.

absolutely brilliant book. lovely story and well read. thumps up to all of you x

This was a wonderful story and excellently narrated.
The half brother was the better man, and the gypsy gave me goosebumps it was that good.