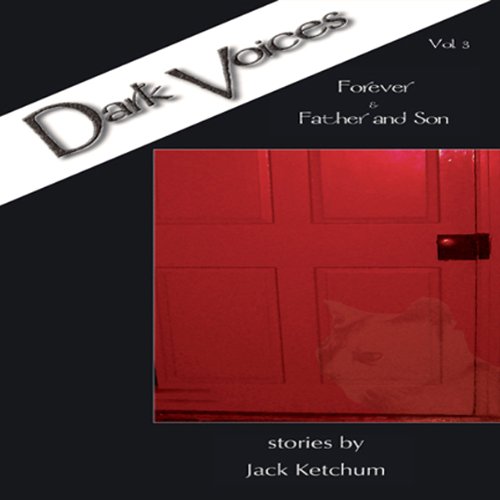 'Forever' and 'Father and Son'

'Forever' and 'Father and Son'

I wouldn't bother to review this had there been anything else by Jack Ketchum on audible, but this is the best you're gonna get from one of the best authors. Ketchum has earned quite a cult following (thanks to backing by better known authors like Stephen King) and has had three of his books turned into movies ('The Lost', 'The Girl Next Door' and recently 'Red'). He's one of the best contemporary authors working in this genre, or any genre for that matter.

Until audible decides to crank out an audiobook of Ketchum's better novels (The Girl Next Door, Ladies Night or Off Season) this will have to do. The first story here, Forever, (which lasts until 25:55 in the 37:36 minute:second length of this audiobook) is very uncharacteristic of Ketchum. Its not horror or even a dark fic, its a love story, albeit a terribly well writen one, about a man losing his wife to a terminal disease. It feels authentic but its not the better of the two. The second, 'Father and Son' which is about an old man stuck in a room, losing his mind, is what most Ketchum fans will want to listen to. And despite it lacks the depth of 'Forever' it'll be the one you'll probably enjoy more for that very reason.

In closing both of these are well-written and you're not gonna get anything better for this price. I'd definitely recommend it, at least until they publish something else by Ketchum.

I love Ketchum, but this production was awful. The music is so loud, that you can't hear Ketchum's words. The music is irritating and constant throughout. A friend and I was listening and we had to give up, cause we could not understand it. I hope to be able to hear these stories in another recording. This is my second Dark Voices production and this irritating music seems to be their MO.