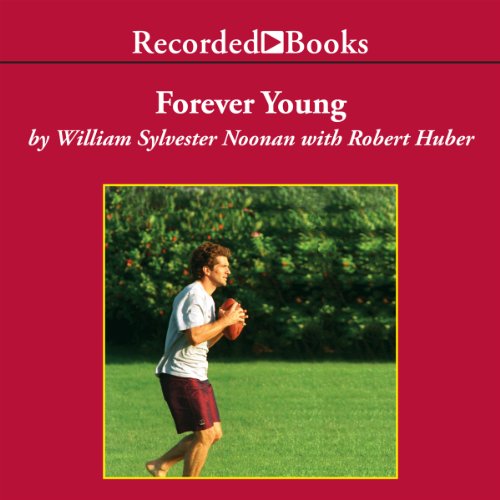 By: William Noonan
Narrated by: Adam Grupper
Try for $0.00

For 25 years William Noonan and John F. Kennedy, Jr. were best friends. Sharing an adolescence in Hyannisport, Massachusetts, the two frequented beach bonfires and the Monday-night yacht-club dances, took road trips, shared albums, sneaked cigarettes on the widow’s walk of John’s house, and scored beer together. And as they grew older, John and Billy never lost the connection they forged in the Kennedy compound as two young boys who had both tragically lost their fathers.

A humble and touching memoir, Forever Young uncovers the private John F. Kennedy, Jr from the matchless vantage point of a longtime childhood friend. Forever Young ispacked with never revealed details of John and Carolyn Bessette’s courtship and wedding, the launch of George, John’s unusually close relationship with his mother Jackie, and the heartbreaking aftermath of the plane crash off Martha’s Vineyard that killed John, Carolyn, and Carolyn’s sister. Noonan also shares the more ribald episodes, including John’s many famous conquests, skirmishes with paparazzi, and his stint as People’s “Sexiest Man Alive.” The definitive story of the son of Camelot, Forever Young is a touching and revelatory tribute to a friendship between two men—and a life cut devastatingly short.

What listeners say about Forever Young

It's 15 years? How can that be? America needed JFK Jr. His friends and family needed him too.

I appreciated Billy's sharing. I cannot imagine how awful this loss was to him and all of Johns close friends. He sounds extraordinary!

Billy confirms that JFK Jr was going after the Senate seat in NY. He would have won hands down.

I for one have always believed he was assassinated. I do not buy the official story. There was a flight plan. John did contact the tower. It was all scrubbed away. Tragic and sad!

It's a very good book! Thank you Billy!

This book seems like nothing more than the author's shameless effort to profit from his friendship with a lost icon. He has few interesting anecdotes and resorts to gossip throughout most of the book. I'm sorry I wasted my time.

I loved this book, with a true perspective from a very good friend. After all these years I still miss JFK JR. Such a loss.

Being an avid Kennedy fan, I found this book very interesting. It provided an aspect into JFK Jr's Life that was a good listen. Well worth the time, and the reader was an easy listen. Anything Kennedy is worth a listen, such an interesting group of people. You don't have to agree with their political life, but lets admit it the Kennedy's are at the very core of America's History!

I recently took up running which affords me a lot of time to listen to books on audible. I started this hobby around the 20th anniversary of JFK Jr’s death, so needless to say- I’ve listened to a lot of books about him- most of them really good.

Billy Noonan’s book was okay for me for most of it. Sort of dull and self-serving but tolerable. It got down right bad towards the end. He slanders the memory of Carolyn like you would expect from a wanna-be spurned lover and he makes John’s last months on this earth all about him (Billy).

Quite frankly- Billy doesn’t seem like that likeable of a guy. Death and grief are hard for anyone but he manages to make that all about himself too...not wanting to join in masses or remembrances or pay his respect to the Bessettes.

If you want good Kennedy books- try What Remains or Fairytale Interrupted. Skip this one. It will leave you feeling hollow.

I loved this audiobook. Billy Noonan lost a good friend when JFK Jr died. We all did but imagine being his closest friend? I was enchanted with the entire memoir. Well worth the credit or $.

Was This Really a Book about JFK Jr?

I could not wait for this book to end. It was not a book about JFK Jr, but instead William Noonan. If Adam Grupper read him as he actually sounds and acted as a friend, I don't know how John could stand him. This was a self serving book. I wish I had never listened to it.