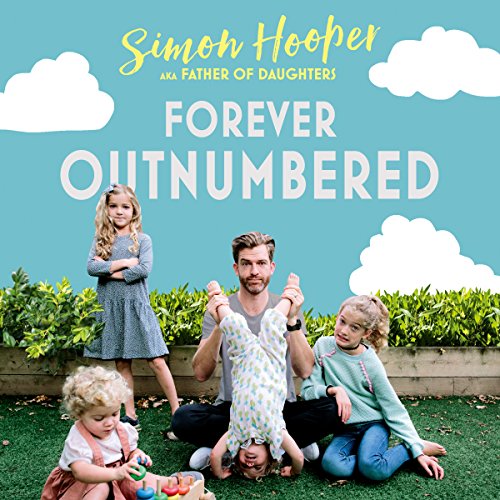 This is the story of my journey into parenthood, from being a 24-year-old man-child with no idea of what being a dad involved to where I find myself today: the single male representative in a household of five women, or, in other words, outnumbered. Our house is now known as 'the place where silence came to die'. It's also where you'll find carpets that are made up of 50 percent glitter and where there are more pink stuffed animals than at a colour-blind taxidermy specialist's. But I wouldn't change a thing. These people are my life.

Real-life parenting through the eyes of a modern-day dad by Simon Hooper, aka Instagram's Father of Daughters.

From uninitiated parents-to-be to those who know the ropes in families large or small, everyone will find something to relate to in Simon's hilarious and chaotic tales of his own home life. His observations of being a father have delighted his hundreds of thousands of followers on Instagram: before now dads are often the forgotten ones who carry the luggage, open stiff jars, take photos on holiday, fix broken bikes, go back to work, do the night feeds and make a mean beans on toast with melted cheese without so much as a pat on the back. All too often dads shrink into the background. But not in this audiobook.

What listeners say about Forever Outnumbered

This was a good read/listen. I enjoyed the humor and Mr. Hooper did justice to his book by reading it.

I have followed FOD on Instagram for a while now. I was thrilled when he finished his book. Hearing him read his book was icing on the cake. I think every new or existing dad should read this as it really isn't a "how to" book as much as a "I know what you are going through" book. It was top notch.

If you follow Simon on instagram you already know he has a great talent in describing everyday situations in a very ironic and enjoyable way. This book was fun and informative at the same time and i really enjoyed it

Suuuuch a funny book! And to top it off it’s narrated by Simon himself which makes it even funnier! Been laughing all day and couldn’t hit pause for a second! Made my day! Highly recomend this book!

Witty, funny and sincere, it's exactly what you'd expect from Simon Hooper, the expert in the art of making you giggle while looking through your Instagram feed. While you'll definitively relate if you are a parent yourself, It's a certified fun read even if you don't.

The best preparation for someone with no kids yet!

Funny, heartwarming and real. Been looking forward to this and it didn't disappoint! loved it!

What a great enjoyable book

Brilliant truth behind the parenting of multiply kids

Absolutely brilliant book for parents of any number of children but from a Mother whom has 5 children I listened to this like he was reading my life a loud. Such a beautifully written true story of how a family with a tribe of children really is - they are your world and it’s clearly heard when listening to this. Please write another.
P.s My Husbands stuff also gets sent to the shed or loft.
Just so you know - I think both you and Clemmie are doing a smashing job and you should be very proud of the Parents you are....even when your late for the school run.

For anyone debating reading this like I was...Please go for it - you won’t regret it.

Very funny, brilliantly read, perfect to have on in the background whilst pottering about. Very down to earth and relatable.

Awful / not my cup of tea

Trying so hard to be drole, and failing so badly. This project/author's natural habitat is social media rather than literature, in my opinion.

was a very good honest guide about his experiences as a dad that will ring true for father's and mothers alike. laughing so hard at time about how normal all is parents really are!

Really enjoyed this, I'm expecting my first and this has been a massive mental prep.

I never write reviews...but had to with this book. This book is very honest in a humerist way. I know it is written from a father's point of view but as me being a mother can relate with so much with what Simon Hooper wrote about.
Really this book is about real family life; through good, bad, funny and "I can't believe this just happened" moments but as parents we won't have it any other way.
If you have kids, you can relate. If your thinking about have kids, it might make you think twice.

really funny book. a lovely insight in to family life. fod is what a daddy and a husband should be.

As a mum of three small people this had my husband & I chuckling! Definitely worth a listen.

I follow father of daughters on Instagram and it's great to hear all the story's that as parents we can relate to.

listening to this book as left me with insight, amusement and with an odd sense of reassurance about having kids.

This had me snorting with laughter. It’s witty, relatable and thoroughly enjoyable to listen to. Lots of universal parenting experiences delivered with a good dose of irreverent humour and honesty. Bloody Brilliant!