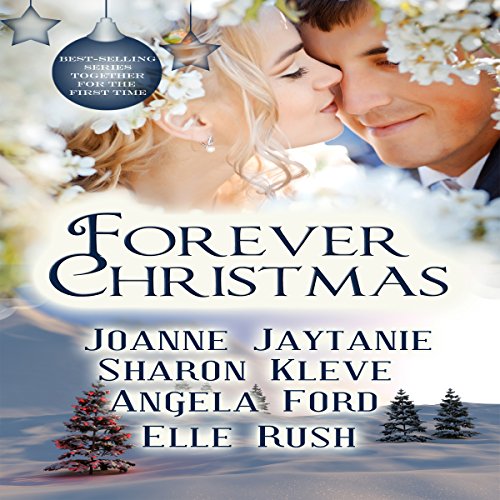 The western Washington town of Glenville is threatened with the possible loss of their 100 year old Christmas tree farm to an outside corporation. Four friends join together to keep the tradition alive and create new opportunities with the rebirth of, Forever Christmas tree farm. Christmas Reflections - Joanne Jaytanie Juliet Swanson left her mundane hometown to work for a large corporation and experience the big city life. It didn't take long to realize that clawing her way up the ladder at others expense wasn't the life she wanted and she returned to Glenville. Reflecting on one's life can sometimes lead to discovering a path you never knew existed.

Christmas Kiss - Sharon Kleve Adelaide Duval has been told how to live her life from a very early age. First by her mother and then by her jerk boyfriend Jason. Both leave her expectantly and now she's starting over with a new home and a new business. A new romance never crosses her mind. Roman Bennett leaves his old life behind in the big city and settles into the small town of Glenville. When he meets Adelaide, his wounded heart is healed with a Christmas Kiss The Christmas Wreath - Angela Ford Annie Dixon is driven to keep Glenville's tree farm from outsiders and devises a plan with her friends. Her life is complete until Ryder Harris returns to Glenville after fifteen years. A child in his eyes, he now sees Annie differently. Annie remains quiet about her feelings. She believes he won't stay. Will the magic of Christmas forever connect these two hearts? Candy Cane Kisses - Elle Rush All bakery-owner Lindsay Leeds wants for Christmas is for Sheriff Keith "Bodey" Bodewell to quit playing games. He's been dancing around asking her out for months and if he waits much longer he's going to lose his shot. Bodey has tried every trick in the book to trick Lindsay into a date only to fail spectacularly every time.

What listeners say about Forever Christmas

Christmas Reflections by Joanne Jaytanie
What a wonderful beginning to the Forever Christmas series! This is an enjoyable story with a sweet heroine, a dashing hero and towns people everyone would want to live among! Ms Jaytanie has a wonderful way with words giving the listener enchanting characters and does not fail to hold your attention from beginning to end. By the time I finished listening to this story I wanted to pack my bags and move to Glenville!

Christmas Kiss by Sharon Kleve
This second book is another wonderful story in the Forever Christmas series. The heroine is absolutely loveable. After years in a verbally abusive relationship she deserves the kind of man that will treat her with the love and respect she deserves. Roman Bennett may just be that man. He has also had his heart broken and needs someone like Adelaide to help him heal. This is such a sweet, heartwarming, feel good story. One I can highly recommend. And Rufus is the icing on the cake. Sharon Kleve remains to be one of my all time go to authors!

Christmas Wreath by Angela Ford
Angela Ford is a brilliant writer who always delivers sparkling dialogue and wonderful love stories. She always gives us funny moments and never forgets the intrigue! She is an excellent and entertaining writer who can capture your attention and suck you into the world she so aptly creates in her stories. Annie and Ryder's story is no exception. I thoroughly enjoyed the sweet romance in this third book in the Christmas Forever series. Thank you Ms. Ford for this gem of a book; you never disappoint!

Candy Cane Kisses by Elle Rush
In this fourth book of the Forever Christmas series we get Lindsay and Bodey's story. Their story is a sweet conclusion to the series and was a fun, quick listen. Plus the descriptions of the delicious baking had my mouth watering for Christmas treats! This is a definite must listen, as is the entire series.

So cool how all these authors collaborated and came up with a fun and most enjoyable series. It was also nice that we were treated to a couple of recipes throughout the book…thank you ladies!
Christy Williamson does a nice job with the narration.