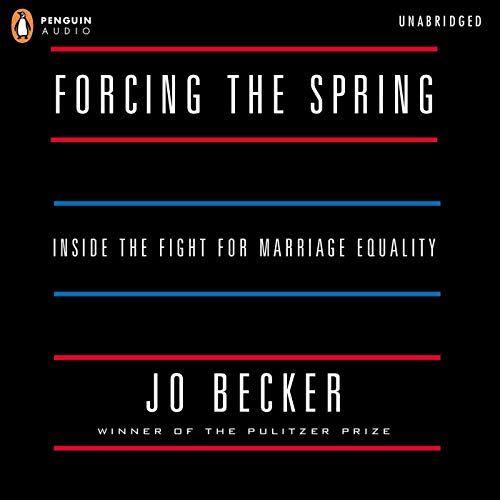 By: Jo Becker
Narrated by: Jamie Leonhart
Try for $0.00

A tour de force of groundbreaking reportage by Pulitzer Prize-winning journalist Jo Becker, Forcing the Spring follows the historic legal challenge mounted against California’s ban on same-sex marriage, a remarkable lawsuit that forced the issue of marriage equality before the highest court in the land. For nearly five years Becker embedded with the lawsuit’s plaintiffs, was given free rein within the legal and political war rooms where strategy was plotted, and attended every day of the trial and every appellate argument. Based on singular access to the internal workings of this momentous trial - and enlivened by original interviews with the participants on both sides of the case, many speaking for the first time - Forcing the Spring offers a gripping behind-the-scenes narrative with the lightning pace of the greatest legal thrillers.

Forcing the Spring begins with California’s controversial ballot initiative Proposition 8, which banned gay men and lesbians from marrying the person they loved. But this electoral defeat galvanized an improbable alliance of opponents to the ban, with political operatives and Hollywood royalty enlisting attorneys Ted Olson and David Boies - the opposing counsels on the Supreme Court’s infamous Bush v. Gore ruling - to join together in a unique bipartisan challenge to the political status quo.

Despite stiff initial opposition from the gay rights establishment, the case against Proposition 8 would ultimately force the issue of marriage equality all the way to the Supreme Court, transforming same-sex marriage from a partisan issue into a modern crisis of civil rights. Shuttling between the twin American power centers of Hollywood and Washington - and based on access to all the key players in the Justice Department and the White House - Becker offers insider coverage on the true story of how President Obama "evolved" to embrace marriage equality, the Obama administration’s surprising role in the Supreme Court battle, and the unexpected role the controversial issue played in the 2012 elections.

What starts out as a tale of an epic legal battle grows into the story of the evolution of a country, a testament and old-fashioned storytelling to move public opinion. Becker shows how the country reexamined its opinions on same-sex marriage, an issue that raced along with a snowballing velocity which astounded veteran political operatives, as public opinion on same-sex marriage flipped and elected officials repositioned themselves to adjust to a dramatically changed environment. Forcing the Spring is the ringside account of this unprecedented change, the fastest shift in public opinion ever seen in modern American politics.

A must-listen account of a national civil rights struggle, Forcing the Spring carries listeners from the first efforts to stop Proposition 8 and the campaign to undermine the Defense of Marriage Act all the way to the final suspenseful moments in the Supreme Court. Clear-eyed and even-handed, Forcing the Spring is political and legal journalism at its finest, offering an unvarnished perspective on the extraordinary transformation of America and an inside look into the fight to win the rights of marriage and full citizenship for all.

What listeners say about Forcing the Spring

Jo Becker has written a compelling drama, tracing the history of the lawsuit that declared unconstitutional California's Proposition 8, revoking the right to gay marriage. The author has a nice ability to take complex legal concepts--heightened scrutiny, equal protection--and make them clear and understandable. More important, she has a great ear for detail, so the characters all come alive. She focuses on the four plaintiffs--Paul and Jeff, Chris and Sandy--and the depth of their feelings for each other, as well as the importance of the case to those within and outside the gay/lesbian community. She also conveys the hard work, strategic decisions and almost obsessive attention to the case by the key lawyers (mostly Ted Olson and David Boies, with troops of lawyers supporting them) and the public relations groups advising them. Becker highlights the opposition from "traditional" gay advocates, who lobbied to avoid a federal case as they moved forward state by state, for fear of moving too quickly. She also provides an entertaining summary of the parallel Edie Windsor case, which set aside the Defense of Marriage Act, and its legal team. The ending, which was of course covered by newspapers and TV, is quite moving. Overall, the book is filled with lively personalities, nicely drawn, in the context of a very significant civil rights case. The narrator had a light touch.

An almost 15 hour listen and not once did the name of Jim Obergefell get mentioned. Obergefell v. Hodges (Docket No. 14-556) was the case that officially gave LGBT+ Americans the right to marry in all 50 states. The story of marriage equality is a three act play, Prop 8, Windsor, and Obergefell. Listening to this felt like watching Star Wars and turning off the movie before the Death Star blows up.

If you are going to tell the story, tell the WHOLE story.