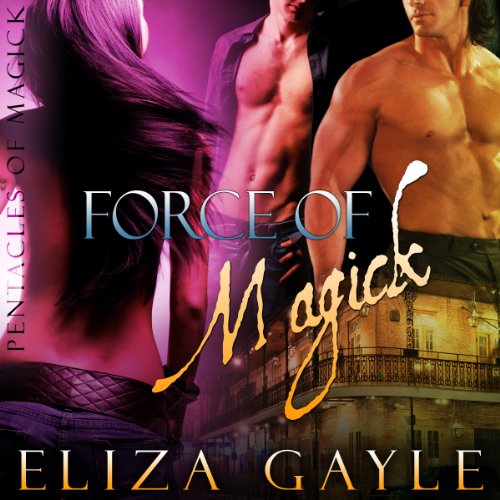 By: Eliza Gayle
Narrated by: Johanna Fairview
Try for $0.00

Dennison Scott is destined to succumb to his dark magick unless he finds and takes his empathic mate, a female born into the prophecy. But this earth witch has already forged a bond with his current lover, Jake that he has no intention of breaking. Curse or no curse.

When both Denn and Jake begin to fantasize about a dark-haired witch, the real trouble begins.

Raven is a witch and a bounty hunter willing to sell her power to the highest bidder, even the enemy. Until she tried to kill one of the Scott twins which left her on the brink of death. Now with her magick bound and captive to two men, she is more vulnerable than ever and she has to decide whether to trust in the impossible or fight for the life she thought she was destined for.

What listeners say about Force of Magick

Oh yeah, this is an uber smexy read!! The third book in the series is all about the steam!!! It does continue the on going story line, but mostly is is about the smexy time!!

The narrative is mixed between the three leads and of course the bad guy. The is also a whisper more with a couple other supporting character's POV. It really helps keep the events of the series moving. Denn is yummy, Jake is a dream boat and Raven is surprisingly sweet. They make a great triad, if they can get past the distrust and past indiscretions.

The smexy time takes up a good chunk of this book. You get plenty of variety with MM, MF and finally MMF. Oh yeah, this one is sure to stoke the fires of many a reader!!! Holy hot and heavy!

I listened to the audiobook narrated by Johanna Fairview, who does a great job with the read. She has a deeper raspy tone to her voice. It really works for the smexy scenes and the men's voices. She also added just the right touch of softness to the women's voices. When it comes to the energy of the smexy scenes, this narrator really gets into things! You can feel the action and tension of the moment in her enthusiastic narration!

The ending of this book is also a chunk of the beginning for the next book. Really smart way to draw the reader in if they are not already invested in the outcome of the series. I can not wait to see Noah get his HEA and find out how the series will end!!! Looks to be a really interesting twist!