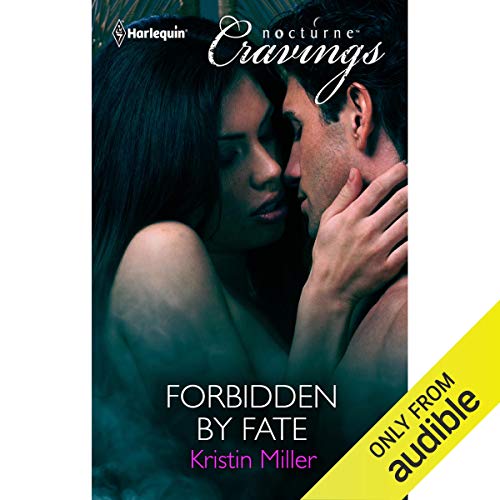 By: Kristin Miller
Narrated by: Lola Holiday
Try for $0.00

Dragon shifter Damon Frost has been banned from stepping foot onto Were land after sharing a night of pleasure with Sasha Moore, heir to the Were throne. Since then, he's been waiting for the opportunity to return and claim her once again - until a territory dispute finally reunites him with his werewolf princess. Damon plans to use every minute with Sasha to remind her of the passion they shared - a fire he's determined to reignite.

With their desire impossible to resist, Damon and Sasha indulge in a night of illicit ecstasy. But will it be enough to satisfy their lust? Or will their forbidden love start a war between their clans?

What listeners say about Forbidden by Fate

This is a pinch of paranormal passion

This was a great, but all too short, romance fantasy - I wish it had been made into a full book but alas it wasn't to be. Doomed and forbidden Were and Dragon shifters reunite after years of denial of their feeling and hunger for each other but with disastrous consequences. Along the lines of a paranormal version of Romeo & Juliet without the "wherest thou goest" and the reams and reams of paper !! and, just maybe, with a happier ending.

A very short listen but it packs a lot in.

I liked the story, although the heroine annoyed me a little. This Hero was willing to give anything to have her, I love that kind of Hero.

The narrator made the dialog sound corny sometimes, when I don’t think the writing was necessarily corny.

Not Bad but Not GREAT

This wasn't too bad this at least had a plot and story line. The Narrator wasn't the best and her male voice almost sounded automated maybe if a different person narrated it maybe I wold have liked it more. This was about young love that was never forgotten that got a second chance.