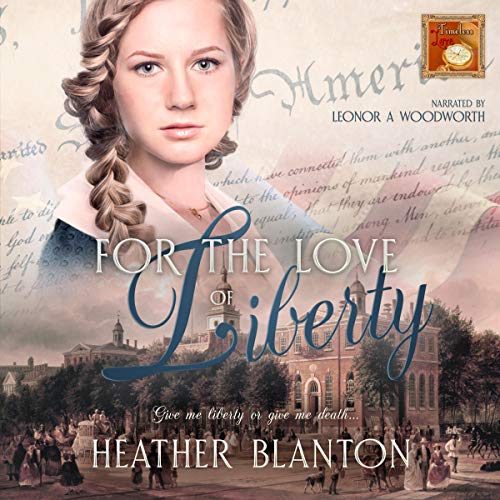 For the Love of Liberty

By: Heather Blanton,Timeless Love
Narrated by: Leonor A Woodworth
Try for $0.00

The memory of a man she’s never met haunts her like a Christmas ghost.

Novelist Liberty Ridley, participating in a genetic recall study, experiences an ancestor’s memory from the autumn of 1777. Stunned by the detail of the "recollection", she is even more amazed to find she's intensely drawn to Martin Hemsworth - a man who has been dead for two centuries. The feelings must belong to Liberty's ancestor. She couldn't be in love with a ghost, a mere shadow from the past. But what if she is?

Frightened by the lethal fury in his own fists, Martin Hemsworth strives to live in peace and honor the king God has chosen for America. But when a mysterious woman awakens his heart, he realizes some passions a man lives for, some he dies for...and others he'll kill for. In the winter of his discontent, what will he do for the love of liberty?

This is a stand-alone book in the time-travel collection Timeless Love.

What listeners say about For the Love of Liberty

I love sci-fi novels and Christian historical romances but never do the two ever meet.....until this series. Heather Blanton cleverly weaves an interesting journey through time..... all with a Christian perspective. It is a believable story with just enough "what if's" to make you wonder. God is big so nothing is impossible.🌠

Leonor A Woodworth is always a pleasure to listen to. I listen to many audiobooks and she is on my top 10 list of best narrators. She is consistent and I especially appreciate her no nonsense delivery. She doesn't over dramatize a scene but allows the story to come alive organically. A true winner! 👏

I was given this free review copy audiobook at my request and have voluntarily left this review. My thanks to the author and narrator for this opportunity. 😊

For the Love of Liberty by Heather Blanton

Oh my heart! This is definitely one of the best time travel romance I have ever heard or read. The story was masterfully crafted and I love the use history in this novel. Very perfect.

The narration by Leonor Woodworth was totally the best too!

A good romantic/time travel/mystery story to try and clear the name of a long ago relative. Lenor A Woodworth was a fine narrator. I was given this book by the narrator,author or publisher free for an honest review.

This was really good. It make me want to study the Revolutionary war more in depth. Narrator was great. I received a complimentary audio and this review is voluntary.

First of all, this is my FAVORITE narrator so far <3
I was hesitant at the beginning when I started listening and realized that the story involves time travel. However, I decided to give it a try; it was a brilliant idea…
The story is BREATHTAKING, emotional and thought-provoking. It’s a wonderful read and something that will stay with you for a long time. The journey that Martin and Liberty embark on is engrossing and heartfelt. I genuinely enjoyed listening; the story weaves the past and present together in a way that brings the characters to life.
I received an audio copy of this book; I was not required to write a favorable review. All opinions in this review are my own.

I very much enjoyed this Christian time travel romance. It had all the elements I like in a
story including a little mystery, intrigue and a sweet romance. Also, the narration was very good. Thank you.

what a fun concept of genetic memory! can you really go back in time without messing up the future?
I got this as an audio book and couldn't stop listening!

This was an interesting take on a time travel historical fiction romance with a sci-fi medical assist to accomplish the task. The story started a little slow and I honestly wasn't sure I liked where it was going. The story did (quickly after that point) grab my attention and I found myself invested in needing to see how it ended. If you like time travel, historical fiction, clean romance, Christian fiction, and stories with a bit of a spy edge then this is a fun mix of them. The narrator does an amazing job and was fun and easy to listen to.

An audiobook.
It’s really been a long time (years) since I read a time travel book. Heather Blanton did a wonderful job going back and forth between times. A great historical romance when Liberty traveled back in time. Spy rings in the Civil War, a man Liberty falls in love with and an ancestor being arrested makes Liberty feel like she has to save everyone and Martin was feeling like he was always losing Liberty. She kept me listening and on my toes to find out how it was going to end. Once you start this book you will not want to put it down. There is one word in the book that is used several times but not in a way that is ugly. You will see if you listen to the reason it was first used. If you like historical fiction and a little modern fiction mixed you will like this book.
The narrator Leonor A. Woodworth did a wonderful job and the story came alive with her narration. I have listened to several books Leonor W. has narrated and they have all been good. She speaks plain and I don’t have to wonder what she is saying.
I received this audiobook free and was not required to write a positive review. All opinions are my own.

For the Love of Liberty
Timeless Love, Book 4
By: Heather Blanton

This historical fiction / time travel, romance novel takes the listener back and forth between future and past. When Liberty wants to prove that family lore is true she seeks help from a scientific team. There are plenty of twists and turns to keep you listening.

The narration was well done. The characters were well portrayed. Leonor A Woodworth brings the story to life.

A very easy listen and enjoyable time travel romance.
I loved the historical mystery and the suspense. It was very easy to get swept away in the story and the time period and even more so because of the excellent narration.
The romance was sweet and the characters well developed and likeable. The author did a good job of tying all the loose ends together and finding a way for our hero and heroine to have a happy ending.