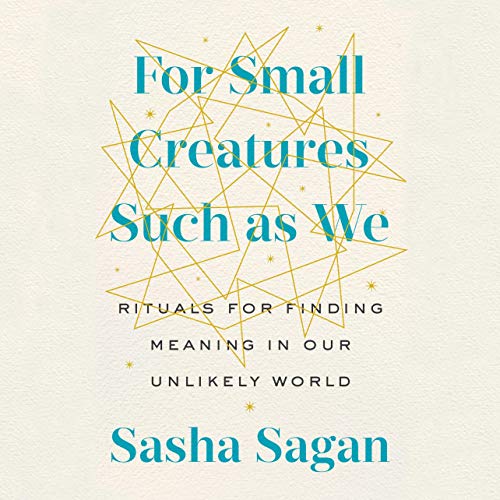 For Small Creatures Such as We

Part memoir, part guidebook, and part social history, For Small Creatures Such as We is the first book from the daughter of Carl Sagan and Ann Druyan - a luminous exploration of Earth's marvels that require no faith in order to be believed.

"What is the meaning of life? Sagan finds its meaning everywhere - with her family, around the world, and especially among the stars of the cosmos. Read her work; you'll have a deeper appreciation for your every step, every bite, and every breath." (Bill Nye)

Sasha Sagan was raised by secular parents, the astronomer Carl Sagan and the writer and producer Ann Druyan. They taught her that the natural world and vast cosmos are full of profound beauty, that science reveals truths more wondrous than any myth or fable.

When Sagan herself became a mother, she began her own hunt for the natural phenomena behind our most treasured occasions - from births to deaths, holidays to weddings, anniversaries, and more - growing these roots into a new set of rituals for her young daughter that honor the joy and significance of each experience without relying on religious framework.

As Sagan shares these rituals, For Small Creatures Such as We becomes a moving tribute to a father, a newborn daughter, a marriage, and the natural world - a celebration of life itself, and the power of our families and beliefs to bring us together.

“How often have you asked yourself: What is the meaning of life? Sasha Sagan finds its meaning everywhere - with her family, around the world, and especially among the stars of the cosmos. Read her work; you’ll have a deeper appreciation for your every step, every bite, and every breath.” (Bill Nye, author of Everything All At Once)

“She’s Carl Sagan’s daughter, and it shows.... Her style seems to inherit something from that grand master of scientific prose poetry. While never for a moment departing from secular physicalism, she makes a lyrical case for ritual, marking out the rhythms of life from birth to death. A charming book, ringing with the joy of existence.” (Richard Dawkins, author of An Appetite for Wonder and The Greatest Show on Earth)

"Offers ethereal wisdom and worldly guidance... Sagan's debut, a lushly written amalgam of memoir and manual, traces her life as the daughter of Carl and writer/producer Ann Druyan and how she came to appreciate the wonder in the everyday... Profound, elegantly written ruminations on the exquisite splendors of life enjoyed through a secular lens.” (Kirkus Reviews)

What listeners say about For Small Creatures Such as We

A Candle in the Dark

A heartfelt reminder about the wonders of life beautifully told by the author. I felt I was on my own personal voyage around the Sun, seeking meaning and purpose in being alive. It left me with a appreciation of the grandeur of the cosmos. Hopeful. Grateful...for life is precious. Whether you are secular or religious or spiritual or something in between this book is a celebration of all that is or was or ever will be.

Sasha really opened herself up. Her love for her Father came through, and really strengthened the channel of connectedness we all have. You can feel her passions through her voice.
This is a great listen during a drive, or walk where you can appreciate the natural world around you. Truly a labor of love. And Love is what it's all about!

Beautiful, honest, thoughtful... Sasha Sagan's For Small Creatures Such as We is a fascinating read for anybody who looks for spirituality in everyday life.

She has such a poetic and beautiful view of the world. She emphasizes that questioning the world around you is how we grow. That saying “I don’t know” isn’t negative, but door to exploration and knowledge.

I think my favorite (and somewhat the point of the book) is that rituals are natural to us. They’re how we mark the seasons, and celebrate the events/people that we love. Religion doesnt have a claim on customs and rituals. Its simply a group coming together to share appreciation for life. Which I think many atheists miss about religion.

I genuinely wish I had this book years ago when I started questioning my faith. It wouldn’t have made it so daunting and scary.


My ONE gripe is that I wish someone else narrated. She doesn’t have a bad voice. It’s just her pronunciation is a bit slurred that had me questioning what she said occasionally. But it definitely didn’t prevent me from listening to every word!

This book is a lovely binding of memoir, history, truth and heartbreak. It is beautifully told by Sasha Sagan and gives the reader a glimpse of what it was like to grow up with two amazing, supportive, nurturing, intelligent parents. The author puts herself out there for her readers, bravely exposing her innermost thoughts and vulnerabilities. Thank you.

Believes in things that done exist.

Her belief in love shows that she is not immune from magical thinking. I was pretty disappointed to have to hear about her chemical imbalance.

I've never cried from happiness and sadness so much and so hopefully. Thank you Sasha, for this incredible gift of a book.

My daughter with be one month old tomorrow - I found this book just in time.

Wishing you loving warmth in the vastness,
~Dan

I really like the author reads of the book. Her points of view on life, love and kids is one not to be missed. I'm only a couple chapters in but can't wait to finish it.

I truly enjoyed listening and relating to the wonderfully collected thoughts of Sasha Sagan.
Thank you

Beautiful book! What a loving, emotional personal tribute to our human condition, and to Dr. Sagan.