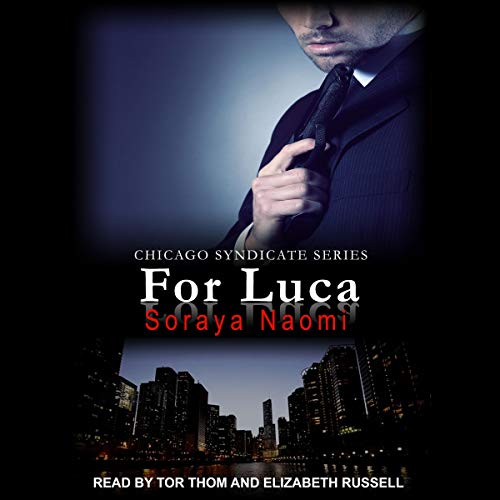 By: Soraya Naomi
Narrated by: Elizabeth Russell,Tor Thom
Try for $0.00

His betrayal destroyed her trust.

Luca did everything for Fallon. But as the underboss of the Chicago Syndicate, he has an entire organization depending on him, and she is a weakness he can no longer afford.

When Fallon's life continues to unravel, she will need Luca more than ever, but can she move beyond all the lies and deceit?

Love still ties them together, but their secrets have driven them apart. Even after everything that's happened, Fallon owns Luca's heart, but the Chicago Syndicate owns his life.

How can he be with the woman he loves yet still remain loyal to an organization that lives by its own rules, above any law? It's a choice he can't afford to make, and when nothing is as it seems, the ultimate decision may mean life or death for Luca.

What listeners say about For Luca

WHAT A GREAT MAFIA LOVE STORY

This book is the conclusion of For Fallon and, IMO, it’s darker than the first book.. it’s also a rollercoaster of a ride that doesn’t let up until the end. Fallon and Luca deeply love each other.. but now they don’t trust each other and Fallon is having a hard time accepting what Luca revealed.. in fact she doesn’t.

There was suspense, a lot of angst, nailbiting drama, kidnapping, revelations and a relationship that’s falling apart.. and I just couldn’t look away. Good secondary characters. Great dual POV narration brought the storyline to life and made it, for me, a 5 star listen.

Worth a credit? Absolutely.. it was a well-narrated rollercoaster Mafia romance that was filled to the brim with action, suspense, sex and lots and lots of feels.

I enjoyed the finale of Luca and Fallon. It was everything I hoped for - angst, murder, kidnapping, hot sex, and much more! I also enjoyed hearing Tor and Elizabeth. They had the perfect voices for the characters! There was a big secret revealed by James at the end and it was so good! Can't wait to hear Adriano's story!!

I fell in love with For Fallon so I was excited to continue the series. It is difficult to listen to at times and does have a major trigger but it was well worth going through the angst to finish Luca and Fallon's story. Next up, For Adriano in the third book in this series.

Wow I really liked these two books at sometime I wasn’t convinced these two would get a happy ever after but I’m really happy they did . The narrators are two new ones for me and I can’t wait to get more books read by Tor Thom and Elizabeth Russell .