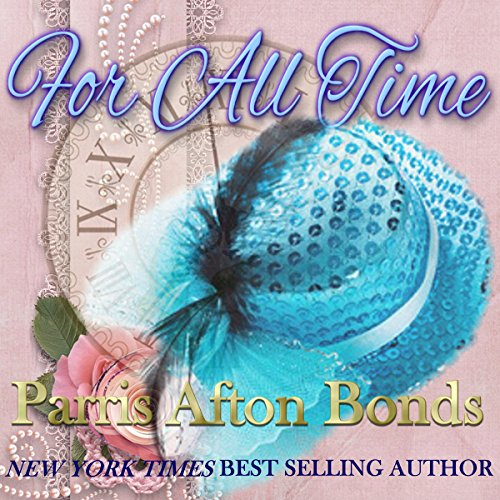 An unanticipated rifle shot in a frontier reenactment thrusts Stacie Brannigan, mother of two, back 100 years to 1870s Texas and into the body of her great-grandmother, Anastasia Wysse--into a body half her age, 20 instead of 40. She finds herself surrendering that body to the noble half-breed Joseph Muldoon, who has rescued her from a Kickapoo Indian raid. She also finds the conundrum of choosing between the man who becomes her great-grandfather and the man forbidden to her by both society and destiny, and she finds what she fears most: She and Joseph are star-crossed lovers who must choose whether to risk their lives and those of others to defy destiny for a love that would burn For All Time.

An interesting idea for a book which did not play out well and had terrible narration.Julie S.Halpern gives a lackluster reading.
During a reenactment a woman is shot and sent back in time to live her Grandmothers life.
This audiobook was provided to me at no cost for a fair and honest review

For All Time by Parris Afton Bonds is a great old fashioned historical romance set primarily during the 1870's in Texas. The story centers around 40-something Stacy who has lived a life without ever being in love. She is shot during a cavalry reenactment and, at the moment she is shot, she time-travels back into her grandmother's 20-year old body when her grandmother was shot during an Indian raid. Stacy is rescued by a tall dark and handsome halfbreed and, in true historical romance fashion, they fall in love. Inevitably she is torn between staying with the love of her life and wanting to return to her time and her two children.

Julie S. Halpern narrated and did a great job. She had different voices for each character, both male and female, and good pace. She also portrayed Stacy's yearning and emotional conflict realistically. Even though I received a copy of this audio in exchange for an honest review, I really enjoyed listening to it!

What disappointed you about For All Time?

The voice. The story was intriguing, but it was hard to pay attention because of the voice.

Would you be willing to try another book from Parris Afton Bonds? Why or why not?

Probably, but not with this narrator and I'd have to listen to a sample first.

I do a lot of reading and listening, and I'm very picky. This audiobook might be perfectly fine and entertaining for YOU. Check out the Amazon reviews of the print version and you'll see I'm in the minority. There were certainly things I liked. The ending is satisfying. I think the recreation of Old West fort life is pretty accurate overall (I've researched another Old West fort so I have some frame of reference). I've also researched other Indian tribes, but not the Apaches. Still, the author's depiction of Apache culture seemed to have random New Age bits thrown in. The "someone's followed me from the present to kill me!" also came out of left field. Perhaps most important of all, the author kept telling me that Stacie and Joseph's love was something special, but she didn't convince me. I didn't find Joseph's supposedly Irish accent very convincing either. His syntax just sounded fake-antiquated and weird. But Stacie was a likable heroine.

Would you ever listen to anything by Parris Afton Bonds again?

Who would you have cast as narrator instead of Julie S. Halpern?

Julie isn't terrible. Audiobook narration is tricky. I would have preferred a bit more acting. Some narrators go in the opposite direction and try too hard, which is more annoying than Julie's understated delivery. But I was also annoyed by the background noise. It's slight, but it's enough to be distracting. Listen to the sample. If you like Julie's voice and the background hum doesn't bother you, you'll be fine.

What character would you cut from For All Time?

Caroline. I will never, ever like a romance hero who is still in a sexual relationship with another woman when the book starts--especially if she remains in the picture after he meets the heroine, and the heroine comes upon them just after the act. YUCK.

I listened to this for free in exchange for an honest review. I was also battling a sinus infection while listening to it. I was hoping this would be a pleasant escape. Instead, the book's faults irritated me more, I think.