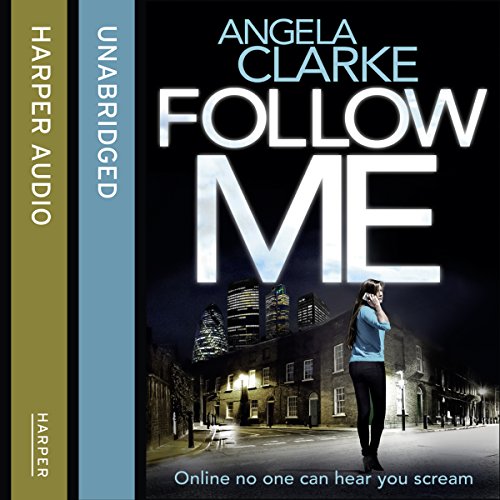 By: Angela Clarke
Narrated by: Imogen Wilde
Try for $0.00

The 'Hashtag Murderer' posts chilling, cryptic clues online, pointing to their next target. Taunting the police. Enthralling the press. Capturing the public's imagination. But this is no virtual threat. As the number of his followers rises, so does the body count.

Eight years ago two young girls did something unforgivable. Now, ambitious police officer Nasreen and investigative journalist Freddie are thrown together again in a desperate struggle to catch this cunning, fame-crazed killer. But can they stay one step ahead of him? And can they escape their own past?

"Follow Me is compelling, a proper page-turner for those who would like a little light gore before Christmas." (Emerald Street)
"Smart, snappy and addictive: Angela Clarke is #killingit." (Holly Williams, Independent on Sunday)
"Pacey, gripping, and so up-to-the-minute you better read it quick!" (Claire McGowan)
"Clarke explores the phenomenon of (social media) celebrity while tapping into your fears." (Rebecca Bradley)
"Smart, fast paced, fresh and frightening. Follow Me is a gripping debut." (Rowan Coleman, author of The Memory Book)
"Follow Me is literally gripping - the tension levels were forcing me to clutch the book so hard that my hands hurt!" (Daisy Buchanan, GRAZIA)
"Outstanding!" (Shots)
"Original, inventive & gripping." (West Herts Drivetime)
"We've been waiting for a novel that shows just how creepy and scary social media actually is and this is it. Angela Clarke knows exactly which buttons to press. #creepedmeout." (Tania Carver)
"A fascinating murder mystery and a dark, ironic commentary on modern social media." (Paul Finch, author of Stalkers)
"Angela Clarke brings dazzling wit and a sharp sense of contemporary life to a fast-paced serial killer novel with serious style." (Jane Casey)
"Fast-paced, tense and playfully witty...." (Graeme Cameron author of Normal)
"Adrenaline-spiking. Paranoia-inducing. A wild & electric take on today's social-media ruled generation." (Becca's Books)
"An author with a promising future if Follow Me is anything to go by." (Rachel's Random Reads)

I found myself becoming annoyed at the way the policemen were portrayed as bungling buffoons and a twenty-three year so on top of life. I also found some of the social media points incorrect. Saying this, i do believe that a more younger reader would find teh book enjoyable.

My suggestion is people over the age of 25 or in the Social Media profession give the book a miss.

Like the narrator a lot. Easily identifiable character voices and lovely voice to listen to.

Story is good and holds your attention as quite fast moving. Quite London centric and desperately trendy, but in view of main subject - social media - suppose it fits.

However, I'm not sure who it is aimed at. Half the time felt I was listening to a book aimed at teens. The 'heroine' is an outwardly cocky 23 year old, who feeds the homeless and stands up for the weak. A know all with no respect for authority or anybody over 30. All very stereotypical. The author made the police into uneducated idiots with little to no general knowledge and no understanding of technology whilst the heroine Freddie, a graduate made sense of the literary and historical references. To me she had little credibility and the author had to crow bar her into her role as social media consultant. I didn't like her character and preferred her childhood friend Nas, who at least seemed to have moved on from a sulky 15 year old.

At one point, the lead detective jumps and complains about a mobile 'shaking' when referring to a phone on the vibrate setting. At the same time he is talking about meow meow, so being credited with knowing about up to date recreational drugs whilst having no idea about mobile phones and A complete lack of knowledge about Twitter/Facebook etc

Despite getting a bit annoyed at the show off, mouthy Freddie seemingly out thinking everyone, I did enjoy the story. Despite being over the hill myself, I do understand and use social media as do plenty of others my age. The author should perhaps recognise this and not assume you have to be 23 to crack modern day crime.

Having criticised this I will get the next in the series as I liked the story but I hope characters are more rounded and have a bit of depth.

APOP - A pile of pants

Def worth a read

The first of two in the series. The story flows well and is believable. Characters are well thought out and honest. I read them the wrong way round so already knew the relationship between the main characters but it didn't spoil anything, each book could be read alone. Who dunnit keeps you guessing too!

Plenty of twists, and a step towards our own realities! One two three four five

Really enjoyed this. Recommend it to anyone who loves crime novels and / or social media. it might make you delete all your online accounts though...

Loved it. Great story, and a unique modern take on thrillers. Looking forward to the next one!

Really liked the sound of this one and to start with, I thought it seemed promising. The policemen are just too bungling and stupid though and the social media savvy reporter just too smug. Another reviewer suggested it was maybe aimed at a teen audience and I can see where that's coming from.
Gave up before the end and won't be buying the next in the series.

Has Follow Me put you off other books in this genre?

its possible the the story is so bad it made the narrator sound annoying...

Have you ever sat on public transport next to a very loud teenagers ?
this book is exactly like that!
Annoying !

The main character Freddie is very immature and I found it hard to like her. Otherwise it was an OK book, the narrator did a very good job.