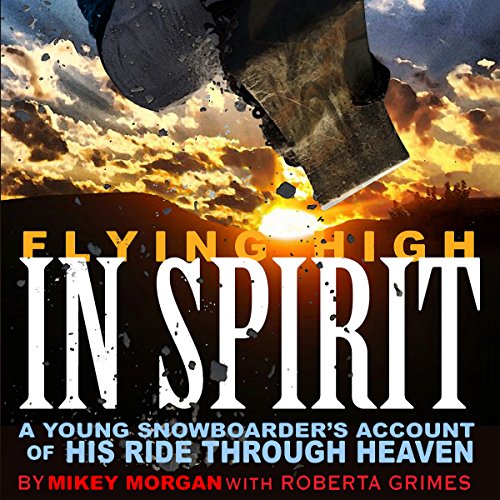 Mikey Morgan is a very advanced being who last incarnated on Earth in the 1600s. He continued after his last earth-lifetime to advance in the afterlife levels over centuries, eventually reaching the mid-sixth-level of the afterlife, very near the Source. Life there is perfect! But Mikey and other advanced beings have become concerned about the state of life on earth in the 21st century, the hatred and violence, and the inability of most of us to make much spiritual progress. Mikey has long been a teacher in the afterlife levels. What he wanted to do was to teach on Earth, so he accepted an optional brief Earth-lifetime that ended in 2007. His pre-birth plan had been that he would re-accustom himself to life on Earth, and then for the balance of his mother's life he would teach us through the veil in the language of a modern 20-year-old.

Flying High in Spirit is Mikey's first book, dictated to his mother by pendulum. He begins by recounting in fascinating detail his unexpected death, his return to the afterlife levels, and his dawning recall of who he is and what his pre-birth plan had been. Mikey's vivid account of how the afterlife levels feel to someone who has just returned, the sights and the activities, and his description of how he manages to reassure and comfort his family on Earth all make for fascinating listening.

As Mikey's mother, Carol, begins to recover from the devastating loss of her son, and as she comes to understand what Mikey's mission is, and the part that he needs her to play, she learns how to communicate with him by pendulum. Gradually, together, they find his voice, so Mikey's teaching mission can begin.

In Flying High in Spirit, Mikey shares important eternal truths in ways that are easy for us to understand. He speaks to us frankly and cheerfully about how life works, how reality works, what the afterlife is like, and how we all can make the kind of spiritual progress that he has made.

What listeners say about Flying High in Spirit

I found this a delightful and thorough description of the afterlife and our purpose here on earth. Nothing here conflicted with my own research and experiences with the afterlife, on the contrary, it supported and reinforced my own findings and understanding.