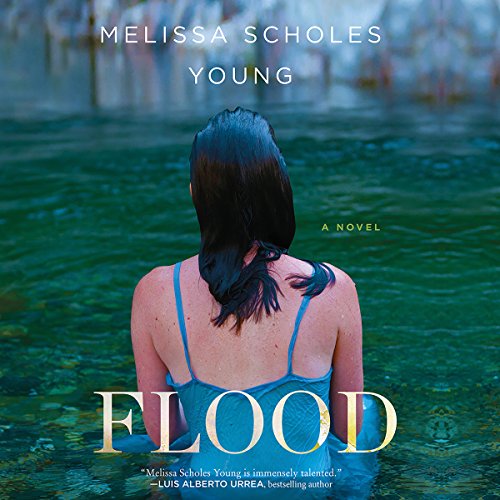 By: Melissa Scholes Young
Narrated by: Hallie Ricardo
Try for $0.00

A sparkling debut set in Mark Twain's boyhood town, Flood is a story of what it means to be lost...and found.

Laura Brooks fled her hometown of Hannibal, Missouri, 10 years ago after a historic flood and personal heartbreak. Now she's returned unannounced, and her family and friends don't know what to make of it. She says she's just home for a brief visit and her high school reunion, but she's carrying too much luggage for that: literal and metaphorical. Soon Laura is embroiled in small-town affairs - the contentious divorce of her rowdy best friend, Rose; the campaign of her 12-year-old godson, Bobby, to become the town's official Tom Sawyer; and the renewed interest of the man Laura once thought she'd marry, Sammy McGuire.

Leaving town when she was 18 had been Laura's only option. She feared a stifling existence in a town ruled by its past, its mythological devotion to Mark Twain, and the economic and racial divide that runs as deep as the Mississippi River. She can't forget that fateful Fourth of July when the levees broke or the decisions that still haunt her. Now, as the Mississippi rises again, a deep wound threatens to reopen, and Laura must decide if running away once more might be the best way to save herself.

What listeners say about Flood

Great story in an interesting setting.

Worth the money and thw time.

The narrator uses an urgently defensive and searching tone for the lead character's voice and captures subtle accent changes as well as personalities among all of the characters. Definitely one of the best narrators I've heard.

The plot is intriguing but Laura's observations really carry the book. She's clear-eyed about her own dilemmas, and she's had to be her own moral center. The desperation of poverty and helplessness -- especially, as represented by the levees, which literally hold together the lands and lives of the disadvantaged people of Laura's home town. Lands bought recently by corporations have strong protections against the floods, while the quality of the levees on family farms leaves those people at risk even from their own neighbors -- because if someone else's levee fails, your land is likely safer. The sharp social and economic divide between the well-off and the have-nots is etched with a matter-of-fact resignation.

I did become annoyed with Rose, Laura's conscience-free best friend, and kept wondering when Laura would quit letting Rose walk all over her . . . ditto her brother, Trey. The hometown boyfriend, Sammy, does seem a bit too good to be true. All of this was redeemed by the honest dialogue and uncompromising genuineness of their reaction to their life circumstances.
Other characters, so real it was spooky, were captivating: the boy Bobby, Laura's aunt and Laura's mother for sure.

I look forward to hearing another book by this author, and by this narrator.