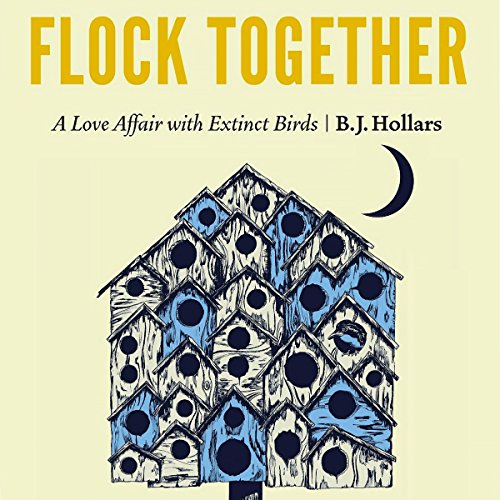 After stumbling upon a book of photographs depicting extinct animals, B.J. Hollars became fascinated by the creatures that are no longer with us, specifically extinct North American birds. How, he wondered, could we preserve so beautifully on film what we've failed to preserve in life? And so begins his yearlong journey to find out, one that leads him from bogs to art museums, from archives to Christmas Counts, until he at last comes as close to extinct birds as he ever will during a behind-the-scenes visit at the Chicago Field Museum.

Heartbroken by the birds we've lost, Hollars takes refuge in those that remain. Armed with binoculars, a field guide, and knowledgeable friends, he begins his transition from budding birder to environmentally conscious citizen, a first step on a longer journey toward understanding the true tragedy of a bird's song silenced forever.

Told with charm and wit, Flock Together is a remarkable memoir that shows how knowing the natural world - even just a small part - illuminates what it means to be a global citizen and how only by embracing our ecological responsibilities do we ever become fully human. A moving elegy to birds we've lost, Hollars' exploration of what we can learn from extinct species will resonate in the minds of listeners long beyond the final minute.

"A finely crafted and often profound memoir." ( Colorado Review)
"A most engaging read." (Joel Greenberg, author of A Feathered River Across the Sky: The Passenger Pigeon's Flight to Extinction)
"Hollars conveys an infectious sense of awe and excitement for every bird he spots." (Justin Hocking, author of The Great Floodgates of the Wonderworld)

What listeners say about Flock Together