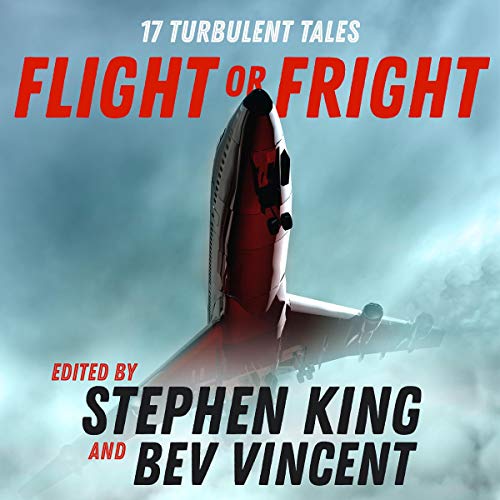 Fasten your seat belts for an anthology of turbulent tales curated by Stephen King and Bev Vincent.

This exciting new collection includes an original introduction and story notes for each story by Stephen King, and brand-new stories from Stephen King and Joe Hill.

Welcome to Flight or Fright, an anthology about all the things that can go horribly wrong when you're suspended six miles in the air, hurtling through space at more than 500 mph and sealed up in a metal tube (like - gulp! - a coffin) with hundreds of strangers. All the ways your trip into the friendly skies can turn into a nightmare, including some we'll bet you've never thought of before...but now you will the next time you walk down the jetway and place your fate in the hands of a total stranger.

Featuring brand-new stories by Joe Hill and Stephen King as well as 14 classic tales and one poem from the likes of Richard Matheson, Ray Bradbury, Roald Dahl, Dan Simmons, and many others.

Book a flight for this terrifying new anthology that will have you thinking twice about how you want to reach your final destination.

What listeners say about Flight or Fright

Stephen Kings name due me to this book but sadly I found some of the stories very poor. They did get slightly better as the book went on but I would save your money and buy a different book!

read some brilliant books recently but this is fire, really not interesting stories. prob won't finish it, it's that bad!

really good read. narrators all did a fantastic job. certainly different to hear a collection of airplane stories

Up up and away

An interesting collection of aviation related stories, with a few stand-outs. Generally stories are interesting and well-read.