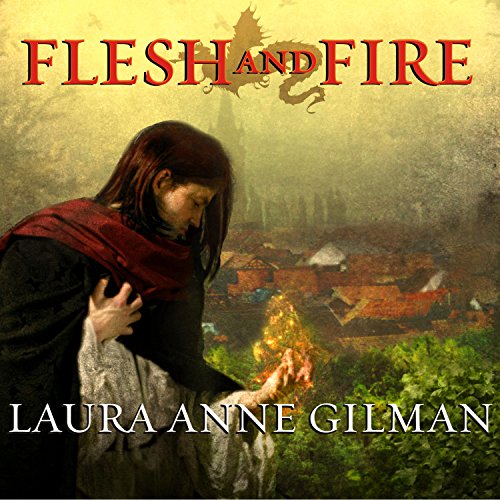 By: Laura Anne Gilman
Narrated by: Anne Flosnik
Free with a 30-day trial

Once, all power in the Vin Lands was held by the prince-mages, who alone could craft spellwines and who selfishly used them to increase their own wealth and influence. But their abuse of power caused a demigod to break the Vine, shattering the power of the mages.

Now, 14 centuries later, it is the humble Vinearts who hold the secret of crafting spells from wines, the source of magic, and they are prohibited from holding power. But now rumors come of a new darkness rising in the vineyards. Strange, terrifying creatures, sudden plagues, and mysterious disappearances threaten the land. Only one Vineart senses the danger, and he has only one weapon to use against it: a young slave. His name is Jerzy, and his origins are unknown, even to him. Yet his uncanny sense of the Vinearts' craft offers a hint of greater magics within - magics that his master, the Vineart Malech, must cultivate and grow.

But time is running out. If Malech cannot teach his new apprentice the secrets of the spellwines, and if Jerzy cannot master his own untapped powers, the Vin Lands shall surely be destroyed.

In Flesh and Fire, the first entry in a spellbinding new trilogy, Laura Anne Gilman conjures a story as powerful as magic itself, as intoxicating as the finest of wines, and as timeless as the greatest legends ever told.

"This launch of a new trilogy...achieves an extraordinary power from its elegant storytelling and unique magical philosophy....Highly recommended." ( Library Journal)

What listeners say about Flesh and Fire

Read as a Children's Story, which it is not.

The story is just fine. In fact, it's much better than about 3/4ths of the Fantasy books that I have read over the past 20 years or so. All of he characters are well developed and the story lines, as well as the back stories, flow smoothly with clear intent and purpose. However, this is not a good audio presentation - it's borderline miserable.

Anne Flosnik, whom I normally love as a reader, presents this story as a Children's Tale. She over emphasizes the pronunciation of each and every word and reads so slowly that you might tend to go to sleep now and then. If she had just read the book in her normal voice, at her normal speed, it would have been just fine. She didn't!

I would not recommend this AUDIO presentation to anyone that I wish to keep as a friend. The book, on the other hand, is well worth reading.

The narrator has a British accent but all the characters sound a bit like Deanna Troi from STNG. I'm torn about this one. On one hand, its interesting, on another, the story is a bit 'too out there'. The whole wine magic seems a bit too farfetched. The philosophy of degredation and humiliation these people must go through to become mages seems sadistic. The slavery and the complacency of the indivduals probably realistic but also a bit boring.

I'm halfway through and mildly interested in finishing. I think a race of people who get magic from wine, might be unique but I'm not entirely sure its that interesitng.

The narrator is a bit of a strange choice. She has this way of over ennuciating certain words. so Master turns out to be "masTAH" etc. It sounds at point strange.

I found the treatment and use of magic in this world to be quite original in its approach. The development of the hero's untrained talents is plausible. The character's social world is one completely accepted by him--that only slaves can ever rise to the full glory and honor due the vineart mage. The attention to detail that the author gives to the setting (both the socially and geographically) and to the magic arts would not go amiss if applied more thoroughly to the plot. Still, it was an interesting enough story to allow for a few hours of pleasant escapism. It always takes me an hour or so to become accustomed to Anne Flosnik's voice and interpretaion. But she's quite professional and not a deterrent to enjoying the listening experience.

It was pretty good

I know that some of the previous reviews have been bad, but I liked it. Yes it was slow, but the story is a good one and I'm looking forward to the next book.

Some of the accents that the narrator used - were pretty cool, a nice change from the ubiquitous British (I actually love British accents when listening to narrators, don't get me wrong). The slow reading speed wasn't a problem for me.

Overall, not spectacular but a pretty good story.

I loved her Retriever novels. This is not one of them. It is slow going and doesn't really get any better. I am trying to finish it, but am half way through the second half and about to give up. The descriptions of vineyards are almost lyrical, but overall, the book just doesn't hold my attention.