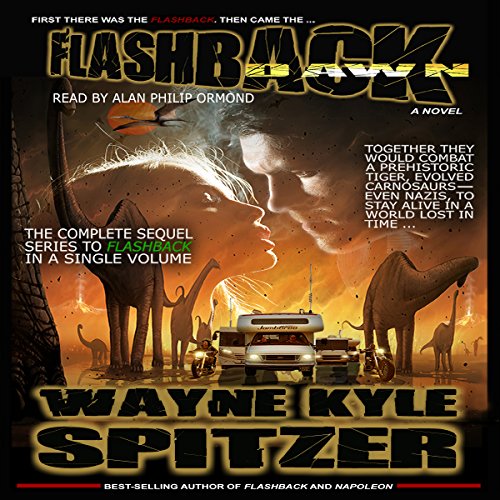 The complete sequel to Flashback (originally published as a serial).

Naaygi found them waiting for her - as she somehow knew they would be - as the cage doors opened, their forward-facing eyes glinting the same hue as the lights in the sky and their dark, storm-colored bodies held absolutely still (even as another animal joined them and brought their number to four).

She even knew somehow what they were: a breed of carnosaur the “evolved” humans had called nanotyrannosaurs, the “Pygmy Tyrants”, and that one of them, the one with the brand upon its tail, the leader, even had a name - Napoleon, for he had been bounced forward and back in time via another alien species well before the Flashback and still bore the scars of his sojourn among the humans. She didn’t know how she knew these things, no more than she knew just where, within herself, Naaygi ended and they, the lights in the sky, began. She just did; just as she knew that the Nano-Ts represented a queer offshoot of the dinosaur population that was altogether fleeter, deadlier, and cannier than anything that had come before it.

And thus she bowed to them, her avengers, her killers - their killers, the lights in the sky - the rain running in rivulets down her body as she dropped to her knees and touched her forehead to the pavement, a pavement which ran red with blood and was strewn with the dismembered, disemboweled corpses of at least 50 men and women.

And then she whispered to them in a language older than words, "Follow me."

What listeners say about Flashback Dawn

Enter through Time and Space a new World of creatures,topography,climate and everything you think you know
and understand.Through a great Narrator this alien World is brought to you through the magic of Audio.Your mind
glistens with images and sounds emanating through the synapses of your brain.

Really liked this story, and the narration brought it to life. It's not my normal genre, but I really am glad to get an opportunity to listen, because I enjoyed it! Lots of action, suspense, and gore, if you like that sort of thing, I do! :) I definitely now want to listen to the first one, so I can get fully acquainted with the series. Great job!!
I was given this free review copy audiobook at my request and have voluntarily left this review.

This was a great action-packed audiobook about a group of people trying to survive, following an apocalyptic event known as the Flashback. There is conflict among the group, danger and threats from the creatures now roaming the planet and other humans also trying to survive.

There are details of the world building that confused me as this is a continuation (sequel) for the story which starts in book 1. Read or listen to that book first to maximize your enjoyment.

I was disappointed when the story ended.

The narrator gives a professional, clean delivery of the story. It was easy to follow along and differentiate between characters.