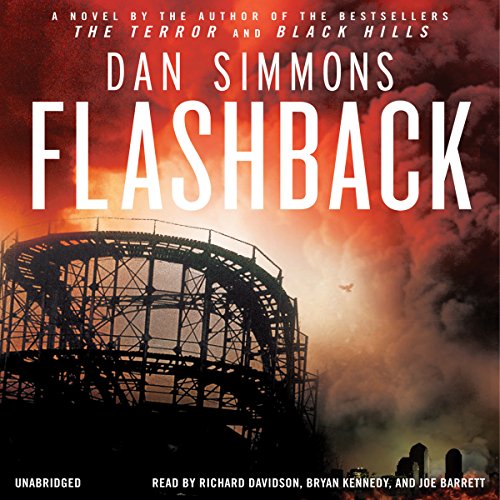 The United States is near total collapse. But 87% of the population doesn't care: they're addicted to flashback, a drug that allows its users to re-experience the best moments of their lives. After ex-detective Nick Bottom's wife died in a car accident, he went under the flash to be with her; he's lost his job, his teenage son, and his livelihood as a result.

Nick may be a lost soul, but he's still a good cop, so he is hired to investigate the murder of a top governmental advisor's son. This flashback-addict becomes the one man who may be able to change the course of an entire nation that is turning away from the future to live in the past.

A provocative novel set in a future that seems scarily possible, Flashback proves why Dan Simmons is one of our most exciting and versatile writers.

What listeners say about Flashback

Outstanding, haunting work from a master of sci fi

There has been a lot of negativity surrounding Flashback, and most of it centers around Dan Simmons’ right wing politics. There’s so much negativity, in fact, that I hesitated before buying and went on to read a few more reviews. In the end I wasn’t sure exactly what to expect, but for the author who gave the world the Hyperion/ Endymion story-- among the finest works of science fiction in the last thirty years--I would forgive much. I decided to give it a try.

I am glad I did. Simmons is at his best when he finds his voice in a haunting tale of personal struggle amidst a larger struggle. The dialogue is often brisk, well-read, philosophical, and reflective. The setting is somewhat cyber punk in the sense of high technology and low people, but somehow more mournful and sad than what typically defines cyber punk.

There is no question that Simmons’ far right wing politics set the stage for the story, and critics who have alleged that he’s personally gone off the deep end may well be correct. My answer to this is “so what”? What does it say about us as readers if we are only able to read books that reinforce all of our political positions and lash out at those that push us-- even if they push us with new points of view. It is perhaps reflective of our partisan political era where each side writes books only for their followers, makes news channels only for the loyal, and each side makes sure the battle lines are all clear. This is an absurd standard to judge fiction by. I am not a prince of Denmark, I am not a boy with a run away slave, I am not a pirate, a space marine, or a horse deciding whether to vote for the full manager or the three day week but I have lived these tales. Books are about considering new perspectives and challenging ourselves, not weeding out anything that doesn’t reinforce our ever narrowing vision of the world.

Loved it. Fast paced adventure story....good warning of what could happen to US if we don't pay attention.

At its core, Flashback is a straightforward detective story. Nic is a washed up former detective pressed back into service by a wealthy Japanese businessman to investigate his son's unsolved murder 6 years prior. Nic was the police detective originally working that unsolved case, but since, his wife was killed in an auto accident, Nic has become addicted to flashback, a drug that can allow the user to re-live past memories which he and the rest of the US population do so liberally. The story is set in the 2030's with considerable geopolitical tectonic shifts. China has imploded with internal strife; Europe's and Canada's declining birth rates have resulted in a gradually shift (due to immigration patterns) to Islamic fundamentalist sharia law, destruction of Israel, Mexico has been overrun by drug cartels, and the US has lost its premier global position with state secessions and supplying military mercenaries for other countries.

The detective story is well crafted and engaging with multiple twists. At the same time, the story unfolds with three different narrations: Nic, his elderly father-in-law, and his 16 year old son. These 3 generational perspectives enhance the belief suspension necessary to enter this dystopian future. While much of geopolitical evolutionary discussion is reasonable, the author can be slightly dinged for an overemphasis on current events that are more revealing with respect to the author's political views than necessary to drive the plot. The innovative chapter numbering also deserves special mention.

The narration is top notch and special kudos to the choice of 3 different narrators for each perspective; this effect positively added to the listening experience.

Someone needs to start telling the truth!

Traitor Biden select puts a fat, mental, horror drag as secretary of health. BLM star goes on national TV to win FoodTV contest, bashes white privilege and murders her own kid in the background. The hypocrisy and lies of the left continue. However, unlike Flashback, I see where Americans aren't stupid, merely "experimental". Yes, Pot smokers still claim they are smoking an unfiltered burning leaf into their lungs and it's curing cancer. A few rounds of super high lung cancer becoming a reality will fix this misperception.
I didn't like the story, I hated it. It's a story which represents what will happen to America if people don't wake up. You can call everyone a racist and blame whites for everything and then vote in the oldest, whitest "President" in history as the cure. You can't allow murdering temper tandrums as a righteous call against a non-existent White supremacy. Thus, "the story", the threat, is real. Liberalism is a mental illness which not even Flashback can cure.

What an amazing story. The entire book from cover to cover was exciting and kept me coming back. The one issue I had was the narrator for Val sounded like he was reading a children's book to sick kids in a hospital. His lines consist of curses, rapes, murder etc, but he sounds like he's reading Mr. Men books. It really took me out of Val's story because of how annoying his voice was.

Thankfully Val's story is the least read of the 3, and the other two narrators were fantastic, so it wasn't too bad.

For me this book started out slow, but soon drew you into the story. I really felt for the main character. But then again, sometimes I didn't like him. I liked the different view of the future for America, it's not one that you see everyday.

I want my freaking credit back.

You know I read all of the other reviewers' warnings about the political stuff in this book before I decided to buy it. I thought maybe the reviewers were just being overly sensitive. The premise of the book sounded really interesting, and I've enjoyed other books by Simmons in the past. (Although I thought DROOD was a total snore.)

Seriously, I could not get through a third of this book. The political nonsense in here is ridiculously heavy handed, xenophobic, borderline racist and just largely unnecessary to the story. Its so similar to the problems with Tom Clancy's latest book, you have to wonder if Simmons and Clancy are hanging out together in tea party chatrooms or something.

I would argue that even the most ardent Republican reading this book would stop and say WTF??? Did I really just read five pages complaining about Obama's rally in Denver and what did that have to do with this cop trying to solve a murder??? Then again, who knows. Maybe there is an audience of people who will listen to this book and nod to themselves that they knew all along the native American and Mexicans infiltrating our universities would lead to the collapse of the US and people would one day be openly celebrating 9/11 as a holiday in Los Angeles.

Yeah seriously. That stuff is in this book.

Last Dan Simmons book I will ever waste my money on.

I have listened to and really enjoyed many of Dan Simmons' other books. He is a good writer and I love sci-fi. However, this one turned out to be a political diatribe. I can't stand stupid left-wing or right-wing propaganda. Anyway, I listened to it, the readers were a little amateur. The premise of the book started out as an interesting detective story set in a United States that is totally bankrupt, radical muslim terrorists and street gangs have taken over America, and the world. The world has all gone to hell. Then the story devolves into a cheesy cautionary tale of how healthcare reform, drugs, and cut-back's on military spending and nuclear weapons, caused it all. Its funny, Texas takes on this mythical status and is a mecca which won't allow "losers" or "worthless" people into the state. And gosh darn, the protagonist is paying cash for his grandfather-in-law's operation. I felt used, like when Ralphy in "A Christmas Story" figures out his decoder ring's message is just "a crummy commercial."

Although the story itself is interesting and entertaining, the extreme right wing viewpoint continually distracts the reader with it's insistance that if we don't try to improve our lives in the first place, none of this will happen. You are constantly being interupted with reminders that no good deed goes unpunished and that reason equals weakness. "Don't try to be decent people or you will end up in some desperate version of the United States that is run and overrun by immigrants and those horrible japanese!" I had always enjoyed Dan Simmons but was sadly disappointed with this story. I thought that I was buying a novel, not some political warning about how weak we are becoming. The alternate world view is always a wonderful read but I would think that the average person is smart enough to come to their own conclusions without this constant spoon feeding of far right rhetoric.

Read it while you can

In the age of censorship, I am honestly surprised this title is still available. It is a brutal, painful, but absolutely brilliant warning about how quickly we can lose it all, and the haunting depths we would descend to have a small taste of it back. And yes it does get pretty political. So what? Great sci-fi often waxes political, both right and left. Heinlein was notably conservative and Le Guin notably liberal - both were masters of their craft whose work transcends politics. Flashback is such a masterpiece that will unfortunately will never get the fanfare it deserves because it is written from a conservative perspective.

Disregard all the SJW's saying how shocked they are by this novel. They probably didn't even read the book. This is undoubtably one of the best works of science fiction released in the last 20 years. Sadly, most modern science fiction is so focused on being "woke" that they have forgotten about the importance of writing a good book. Science fiction is not twitter. Flashback will make your mind flex. It's not always comfortable and you probably won't but always agree with it, but that's the point!

Dan Simmons is a legend and a national treasure. This book is fricken' awesome, you'll be happy you decided to read it.