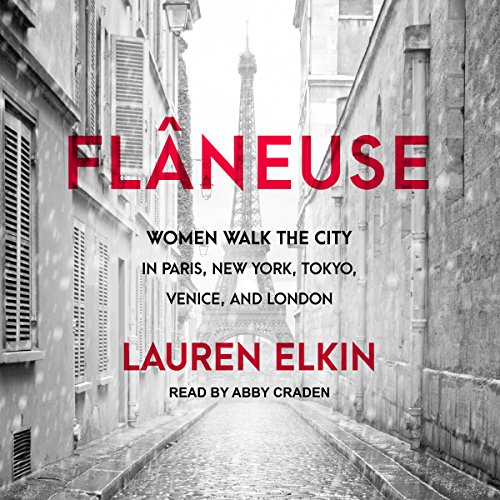 By: Lauren Elkin
Narrated by: Abby Craden
Try for $0.00

The flâneur is the quintessentially masculine figure of privilege and leisure who strides the capitals of the world with abandon. But it is the flâneuse who captures the imagination of the cultural critic Lauren Elkin. In her wonderfully gender-bending new book, the flâneuse is a "determined, resourceful individual keenly attuned to the creative potential of the city and the liberating possibilities of a good walk." Virginia Woolf called it "street haunting"; Holly Golightly epitomized it in Breakfast at Tiffany's; and Patti Smith did it in her own inimitable style in 1970s New York.

Part cultural meander, part memoir, Flâneuse takes us on a distinctly cosmopolitan jaunt that begins in New York, where Elkin grew up, and transports us to Paris via Venice, Tokyo, and London, all cities in which she's lived. We are shown the paths beaten by such flâneuses as the cross-dressing 19th-century novelist George Sand, the Parisian artist Sophie Calle, the wartime correspondent Martha Gellhorn, and the writer Jean Rhys. With tenacity and insight, Elkin creates a mosaic of what urban settings have meant to women, charting through literature, art, history, and film the sometimes exhilarating, sometimes fraught relationship that women have with the metropolis.

What listeners say about Flâneuse

I found the description of this book very misleading. I expected: 1. A discussion about the history &/or experience of walking in cities. 2. The tradition &/or origin of the Flâneuse. 3. The experiences of women past &/or present walking in cities. 4. The author’s experience of walking in cities. Or any variation of this kind of thing. It is not any of these! Usually I finish books even when they are not what I expected as long as they are interesting but after 5 chapters I just can’t face another 7 hours of this authors rambling unfocused style. For me, it is very tedious! and unsatisfying. I won’t be finishing this one!