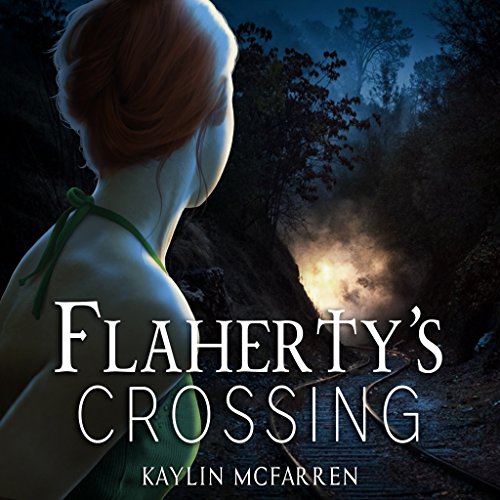 Successful yet emotionally stifled artist Kate Flaherty stands at the deathbed of her estranged father, conflicted by his morphine-induced confession of his part in her mother's death. While racing home, Kate's car mishap leads her to a soul-searching discussion with a lone diner employee, prompting Kate to confront the true reasons her marriage hangs in the balance. When her night takes an expected turn, however, she flees for her life, a life desperate for faith that can only be found through her ability to forgive.

Good at the time but not memorable

Overall, I enjoyed the book and it kept my attention. Kaylin McFarren is a very descriptive writer. However, I find that even shortly after finishing, I don’t remember the characters or plot well. For my favorite books, I remember characters and stories long after I have finished them. I would definitely be willing to read something else by her.

This story really brought home lessons on how forgiveness can change a person's life. A dying father, a chance encounter in a diner, a husband who truly loves his wife, a situation no one really wants to be in, watching the death of a loved one all come together in this story about forgiveness. Very well written and narrated. I got this story via audiobook boom and this is my voluntary review.

Golden Heart winner is a must listen

I loved this book. I say that a lot, but it is completely appropriate for this book.

The set-up for conflict in this book was pretty clear and a story we have seen before – a woman dealing with her dying father and her crumbling marriage. The execution, however, was anything but predictable. Kate is a strong character whose life is teetering. The book opens with her at her dying father’s side, unable to tell him how she really feels. She opens up to his hospice nurse, sharing her memories of her father after her mother’s untimely death by a drunk driver. Kate is bitter, and shadowed by the painful remembrances, unburdens herself. Doris, the nurse, is empathetic and reassuring, letting Kate know her feelings are valid and understandable, but also gently letting Kate know that time is running out.

As she leaves her father’s cabin in the woods, Kate realizes she’s late, and her husband Drew, a divorce attorney, is due home.
Why anyone would choose to become a divorce attorney is beyond me, but seeing the money Drew pulls in, I will concede it might be worth a look. But it also sounds soul-sucking.

The point-of-view alternates between Kate and Drew. Drew’s perspective of the marriage is very different. He is ready to walk away, feeling he is not the centre of Kate’s world. Kate is feeling lonely because Drew has made a string of broken promises.

Kate is in an accident and everything from there goes a little sideways.

I always take notes when I listen to a book, but I don’t want to spoil anything, so I can’t share most of them. The book takes some twists and turns. Some were predictable and others were shocking. This book is about a marriage in crisis and how a couple, when faced with the possibility of losing each other, find a way back.

It is the secrets that have all the power in Kate’s world. As each one is revealed, she is forced to examine her life through a new lens. All that she had believed is called into question. Her entire life is turned upside down. It is at this pivotal moment that Drew has to make the decision of whether or not to try to his marriage.
There are other characters in the background whose stories directly impact Kate and Drew, and some of those stories don’t get resolved until the end of the book, which kept me listening anxiously.

This is a wonderful book about relationships: a daughter and her father, a wife and a husband, friends and lovers, and complete strangers. I cannot say enough good things about the resolution.

Anne Sperry Connors is a new narrator to me and I think she was perfect for the story. A couple of mispronounced words weren’t a big deal. Her voice carries the range needed for the male and female characters as well as Kate’s dying father – croaking voice and all.

This is a must-listen.

Great book and narration. Would recommend highly. I was voluntarily provided this free review copy by the author, narrator or publisher

A great story with a lot of twists!! Anne Sperry Connors does a great job with the narration.
I was given this free review copy audiobook at my request and have voluntarily left this review.

There is a lot to digest in this listen. At its core, it's about relationships and what happens when bad decisions are made. When a man cheats on a woman, when a sister betrays another, when a daughter/woman can't forgive. The list goes on.

The main characters, Drew and Kate, are living in the wake of all of the above. They are not dealing with it very well.

There is a constant reveal of new information (read drama), just like a soap opera. I wasn't a fan of Kate's, at first, but she redeemed herself at the end.

The narration was really well done. This looks like Connor's first book but hopefully, there will be more to come.

If you like drama, with a hint of the spiritual, you will enjoy this listen.

This one started slow for me but once it picked up I thoroughly enjoyed it. There were a lot of twists and turns I didn't see coming...some I found a bit far fetched but I still really liked the story. Anne Sperry Connors did a great job with the narration. I received a review copy at my request and voluntarily reviewed.

Where does Flaherty's Crossing rank among all the audiobooks you’ve listened to so far?

Flaherty's Crossing isn't my usual type of book but I still enjoyed it. Kaylin McFarren does a good job at capturing the vast emotional distance one can find themselves in a marriage. The theme of the book is forgiveness and she was very good at describing the mindset of a woman as everything she thinks she knows is challenged.
*I was given this book for free in exchange for an honest review*

Kate, of course. She was a very strong woman to face all she did and not fall apart.

Which character – as performed by Anne Sperry Connors – was your favorite?

Kate was the character best narrated.

If you could rename Flaherty's Crossing, what would you call it?

Forgiveness is a Six Gun