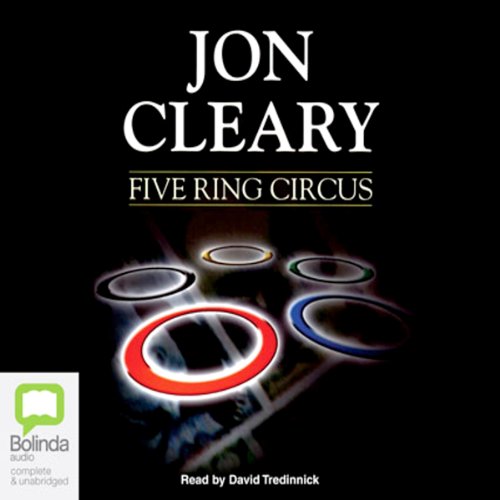 As Sydney prepares for its grand role as host of the next Olympic Games, Scobie Malone is confronted with solving a scam that does nothing for the city's image. Lurking beneath a facade of respectability, illicit deals are being struck and money from Hong Kong is being banked in large quantities. But whose money is it, and where is it really from?

Would you listen to Five Ring Circus again? Why?

I don't typically reread or listen to books more than once, same with movies.

What other book might you compare Five Ring Circus to and why?

None I can think of.

None I can think of.

At last, a reader who can pronounce Australian names correctly.
Having suffered through many of Jon Cleary's books with horrendous mispronounciations, it was a joy to hear it done correctly.
I assume Shaun Grindell is an American who "does" an Australian accent. In the early Cleary books read, he alternated between Australian, New Zealand and South African accents, getting better as he went. Obviously no one thought to ask REAL Australians how to pronounce place names.

David Tredinnick could be better

Bolinda is usually pretty good. While David is 100% better than other Jon Cleary narrators, I still think the narration could be better.

Jon Cleary does write a decent story and there is a little 'tongue in cheek' with his writing.
It seemed to me David Tredinnick went 'over the top' rather than 'understated' with Scobie, Thats my take.

Sadly Jon's Ned Kelly Award winning novel is not available on Audible, so looking on the bright side, I can hope that when it does become available we get a really good narrator who understands Australian
and
speaks the idiom.
So much of the story is in the telling of it. Even a cop story

Story is about the lead up to 'Sydney 2000' and most of us in the real world had lots of fun watching what was going on...behind the scenes..and this story to me is a little slice of life of the time.

So for what it is worth, Cleary is still a great beach read rather than a listen.

I liked that the story was set in Sydney and I rather enjoy light detective stories. The characters in this one however were a bit roughly developed and thus not very endearing. Perhaps that was a product of the reader. Perhaps it was because I kept going to sleep. Overall it was a pleasant enough light “read”.